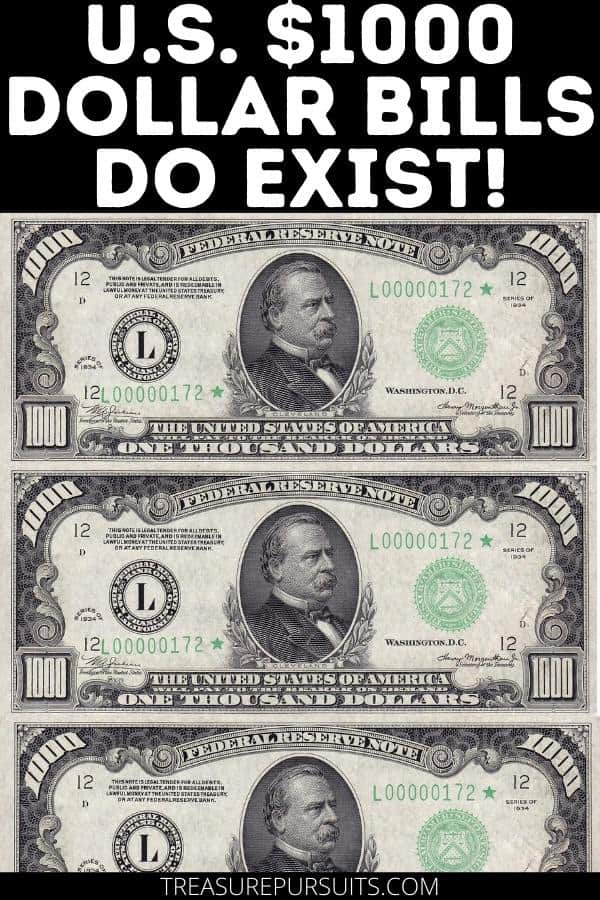 Is the 1000 dollar bill real? Somewhat surprisingly, the answer is yes. There have been several series of $1000 bills printed in the United States since the Revolutionary War. $1000 bills are now prized collectibles that are in high demand. 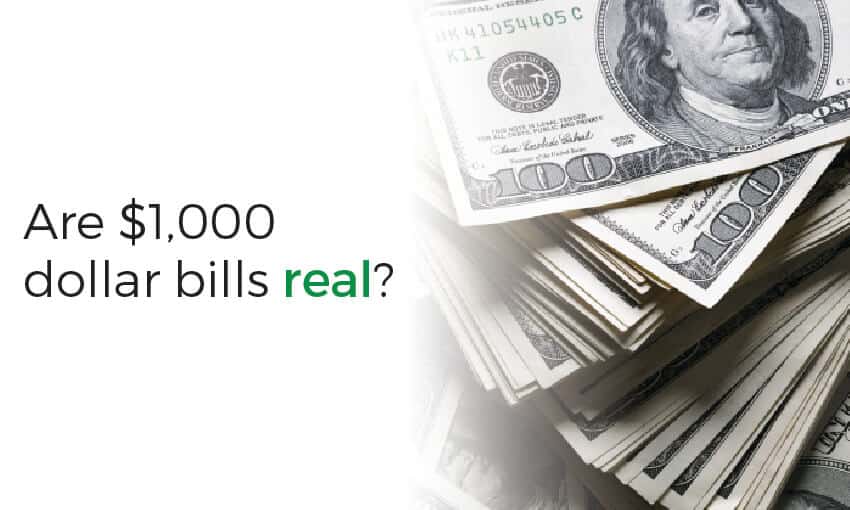 Although the $1000 bill is no longer printed by the U.S. government, it remains legal tender, which makes it worth a minimum of $1,000. However, its collectibility means that its true value is much higher. It remains extremely popular amongst collectors because of its rarity, novelty, and wonderful design, so the rarest bills can fetch huge sums at auction.

The origins of the $1000 bill can be traced all the way back to the beginning of the United States. The first $1000 bills were created by the Continental Congress, the body of delegates that represented the 13 colonies. This type of currency, known as “Continental” currency, was made between 1775 and 1779 to help finance the Revolutionary War.

Although it seems like a ridiculously large sum of money, its value declined very quickly. Because it wasn’t backed by gold or silver, and because many bills were printed, it came to be worth about $20 of “real” money (British pounds). Eventually, Continentals were considered virtually worthless, which led to the disparaging saying “not worth a continental.”

In 1792, the U.S. mint was formed and the U.S. Coinage Act of 1792 led to the replacement of all paper continentals. $1000 bills were printed again around the time of the Civil War to support the war. These large denomination bills were made purchasing war supplies much easier.

The Civil-war era $1000 notes are extremely rare and most are locked up in museums or in the homes of very wealthy collectors. Some of the bills created during this time featured depictions of slaves working in the fields as well as slave-owning presidents like George Washington (on the $50 and $100 bill) and Andrew Jackson (on the $1,000 bill).

In the years that followed, $1000 bills became more commonplace and were often used for real estate deals and payments between banks. There were several series created over the years. The notes that are still reasonably obtainable by collectors include the:

Surprisingly, $1000 bills were still seen in circulation until the early 1970s. It would be extremely unlikely to see one in circulation now, given their high value and rarity. Only very damaged $1000 bills would be worth close to face value, with even common notes in “Fair” condition going for over $1600.

Fun fact: Many of the $1000 bills that were taken out of circulation were shredded and recycled into building materials like insulation and roofing shingles. A part of your house might be made from $1000 bills!

Although there were several series of the $1000 produced, only a few are easily obtainable by collectors. You are most likely to see bills from the 1928, 1934, and 1934A series, as they were produced in large quantities.

The main determinants of value for a $1000 note are its condition, rarity, serial number, and any unique features. The impact of condition and rarity are obvious enough (rare notes in better condition are worth more). When it comes to serial numbers, notes that have a number below 100 will attract a premium.

About 1% of $1000 notes also feature a star in the serial number. These “star notes” were produced to take the place of any notes that were misprinted at the mint. Some series of the $1000 bill has fewer star notes than others, like the 1928 series. This makes 1928 star notes worth much more than a standard note.

A final point of distinction between the $1000 bill series is the issuing district. Some series were printed in a variety of cities including New York, Philadelphia, Chicago, St. Louis, Minneapolis, Cleveland, Boston, Richmond, Atlanta, and San Francisco. Because certain cities produced fewer notes than others, their collectibility will be higher.

Some notes will have a colored seal on them (usually green, blue, gold, silver, or red). In some cases, the city that printed the note will have used a slightly different ink for the color of the seal. This can affect the value. The $1000 notes that collectors are most likely to encounter include:

The front of the bill features a portrait of Alexander Hamilton and a distinctive blue seal. The rear side has a beautiful illustration of a bald eagle clutching some arrows, a wreath, and the American flag.

One interesting feature of this note is that it has a dollar sign on its back. It is one of a handful of notes to do so, which enhances its collectibility. The serial number on this bill doesn’t affect its value much, as many notes with low serial numbers are still in existence.

The main determinants of value will be the note’s condition and the issuing district. This note is highly valuable and you can expect a note in ‘good’ or ‘fair’ condition to be worth around the $8,000 to $10,000 mark. Rarer notes in excellent condition can be over $100,000.

The 1907 $1000 Gold Certificate Bill is a popular note amongst collectors because of its beautiful design.  There are six different 1907 $1,000 gold certificates in existence. The most common types are signed by Parker and Burke or Teehee and Burke. These bills are worth between $10,000 and $30,000 based on their condition.

The front of the note features a portrait of Alexander Hamilton while the rear is gold/orange and features a seal with a bald eagle in it.

This bill looks virtually identical to the 1907 $1000 Gold Certificate Bill. The only difference will be the serial number and the signature. 1922 bills are signed by Speelman and White. This bill has a similar value to the 1907 one: between $10,000 and $30,000 for common notes and over $100,000 for extremely rare ones in excellent condition.

The affordability of this note makes it a common entry point for collectors purchasing their first $1000 dollar bill. This series is easy to identify thanks to the empty space on the right-hand side of the bill. Although it looks like a misprint, this is completely normal.

There are no varieties for this note as they were all signed by Woods and Mellon, and there are no star notes. As a result, the price of a 1928 $1000 Gold Certificate will be based almost entirely upon its condition.

The front of this bill has a portrait of Grover Cleveland and has a gold stamp on the left hand side. The back is green and features the text “The United States of America – One Thousand Dollars”

This note features the same portrait as the 1928 $1000 Gold Certificate and some similar detailing. However, it has a green sigil on the right side of the note and a federal reserve stamp on the left.

It is also marked as a Federal Reserve Note and has green serial numbers. The back of the note is also green and features the text “The United States of America – One Thousand Dollars”. Although this bill says it is payable in gold, it is not a gold certificate.

This type of note is relatively common, which makes it affordable for most collectors. A circulated note in good condition will sell for about $1,800, while circulated notes in excellent condition can reach $3,000. Notes that have star symbols can be valued at over $10,000.

This note also features a portrait of Grover Cleveland. It is distinguishable from the 1928 Federal Reserve Note by the date, the signatures, and the letters used in the serial numbers.

One of the key differences between 1934 $1000 Federal Reserve Notes is the color of the seal. While most notes will have a pale green seal, some have a lime green seal. Lime green is somewhat rarer and will attract a premium. Notes that have a serial number under 100 are very valuable and star notes are popular.

The 1934A note is virtually identical but will have an A at the end of the serial. They are fairly generic and usually sell around the $1,500 mark. Uncirculated notes can cost between $2,500 to $3,000. Very low-quality notes with holes or tears may only be worth face value ($1,000). 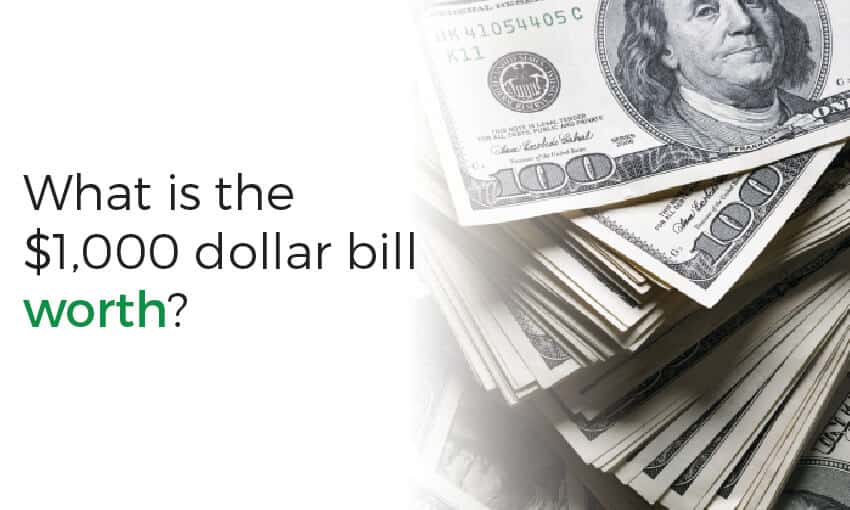 The information below is based on research on the $1,000 bill. It’s recommended that you should always get a professional appraisal before purchasing a $1,000 bill.

Here are some screenshots from $1,000 bills that have sold on eBay.

This one you can see is in much better shape and is uncirculated.

Commonly Asked Questions About The $1000 Bill

The list above only includes the $1000 bills that are regularly traded between collectors. It doesn’t include extremely rare $1000 bills which are commonly held by museums and libraries. If you have a bill that is not listed above, contact a currency dealer to have it professionally appraised.

Yes! You could cash your $1,000 note tomorrow at a bank or spend it at a shop (although the shop’s owner might need to authenticate the note first). However, the value of the note is probably well above $1000.

No, $1000 bills are no longer printed and are not held by banks.

$1000 bills come in a wide range of designs, from beautiful 1907 Gold certificates through to more familiar-looking 1934 federal reserve notes. However, they all feature portraits of presidents on one side of the not.

The U.S. federal government stopped printing all large denomination bills by 1946 and took them out of circulation in 1969.

The government claims that large denomination bills were canceled because they weren’t used very often. However, the real reason is that they often used for money laundering and other illegal activities. 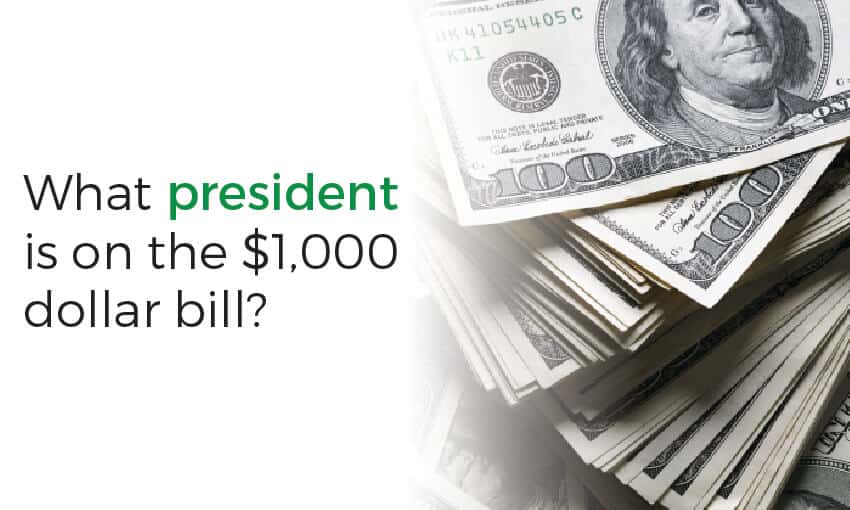 Are misprinted $1000 bills worth more?

Yes, but they are extremely rare.

Many different types of bills have been issued including confederate notes, treasury notes, gold certificates, and federal reserve notes.

What was the most valuable $1000 note sold for?

The most expensive $1000 note was sold at auction for $3.29 million dollars. It was a very rare 1890 series treasury note named “The grand watermelon” because it features many ornate zeros on it (which look like watermelons). Another note of the same series sold for over $2 million in 2018. 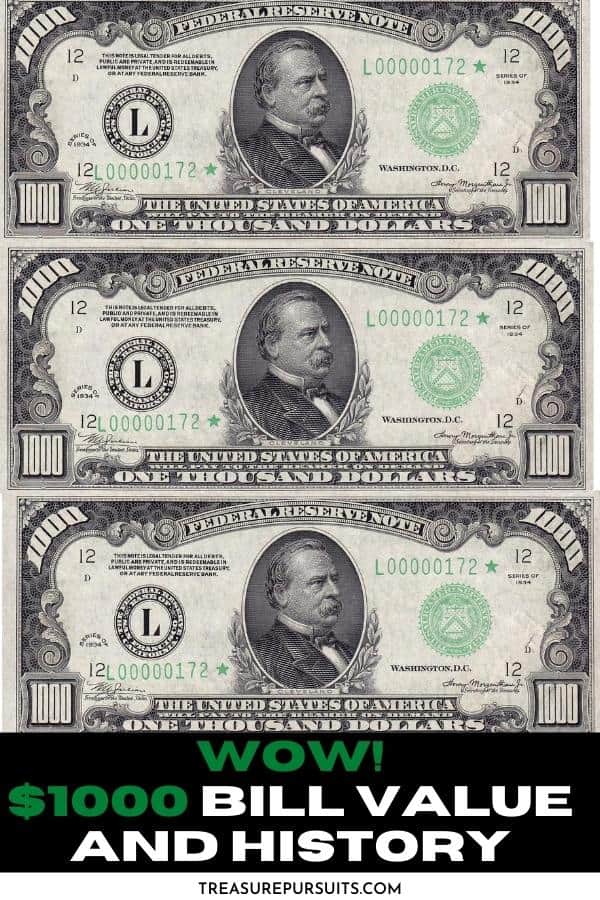 If you enjoy learning about the $1000 Bill, then be sure to pin this to your favorite currency or treasures board on Pinterest so you can find it again if you ever come across an old note!