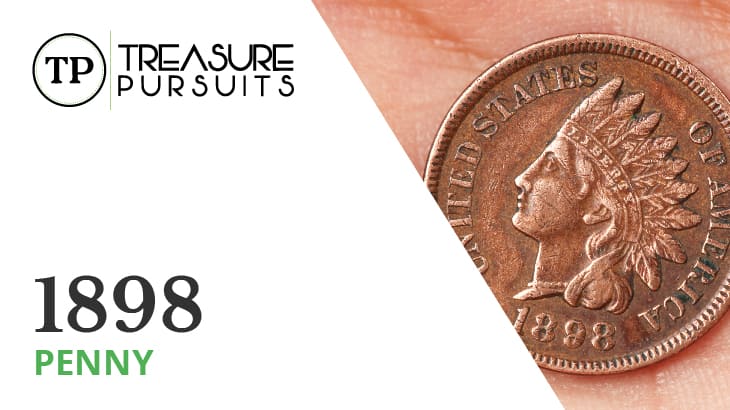 Struck through one of the most tumultuous periods of American history, the Indian Head penny is a classic series beloved by collectors for its design and its historical value.

The Indian Head penny began production in 1859 as the successor to the Flying Eagle cent, the first small cent.

Like its predecessor, the Indian Head penny is the product of James B. Longacre, whose designs were very influential in American coins throughout his tenure as Head Engraver.

The obverse features a profile bust portrait of Liberty wearing an American Indian-style feather headdress, hence the name “Indian Head” cent. Around the rim of the obverse is the legend “UNITED STATES OF AMERICA,” and the date of mintage appears at the bottom of the coin.

In 1859, the reverse depicted a laurel wreath with the denomination “ONE CENT” in the center. This issue is referred to as Type 1. In 1860, the design changed, replacing the laurel wreath with one of oak leaves and adding a shield at the top of the wreath.

Like the design, the composition of the Indian Head penny was also subject to change. Pennies minted between 1859 to 1864 are composed of 88% copper and 12% nickel and are Type 2 coins.

Indian Head pennies were produced until 1909, when a new cent piece, the Wheat penny, was introduced.

History of the 1898 Indian Head Penny

All these came from the Philadelphia Mint (it was not until 1908 that they would be minted elsewhere), so 1898 pennies do not carry a mint mark.

Thanks to the high mintage, examples of this issue can be found with relative ease at coin shows at coin shops.

There are a number of minor date varieties of this issue, but these do not tend to affect the value of the coin. No doubled die varieties for this issue are known, so any doubling seen is most likely the Longacre doubling discussed in the next section.

1898 issues belong to the Type 3 group, meaning that they are composed of 95% copper and 5% tin and zinc. The diameter of 19 millimeters and mass of 3.11 grams are standard for Type 3 pennies.

It is important for collectors of Indian Head pennies to be aware of the Longacre doubling phenomenon.

A feature commonly found on all coins produced in this era but associated most strongly with the Indian Head cent, Longacre doubling can easily be mistaken for a doubled die. However, it is quite different.

A true doubled die variety is caused during the hubbing process of a die. The hub strikes the die in two slightly different places, leaving a double-impression of the design on the die which is then transferred to all coins struck by that die.

Longacre doubling, on the other hand, is the result of modifications to the master die that were either intended to extend the die’s life or to perfect the design. Unlike doubled die varieties, coins with Longacre doubling do not typically have added value.

The tell-tale sign of Longacre doubling is that the doubling is seen on both sides of the design elements, as in the below picture taken of an Indian Head penny obverse.

The fact that the 1898 issue is a later mintage and enjoyed a fairly sizable production means that these tend to be on the lower end of Indian Head pennies in terms of value.

However, Indian Head pennies are virtually always in demand, and examples in fair condition can bring nice premiums.

Red-Brown and Full Red coins are scarce and are typically only found in the highest grades. If you think your specimen has such a luster, it may be worth it to have the coin certified by a professional coin-grading service.