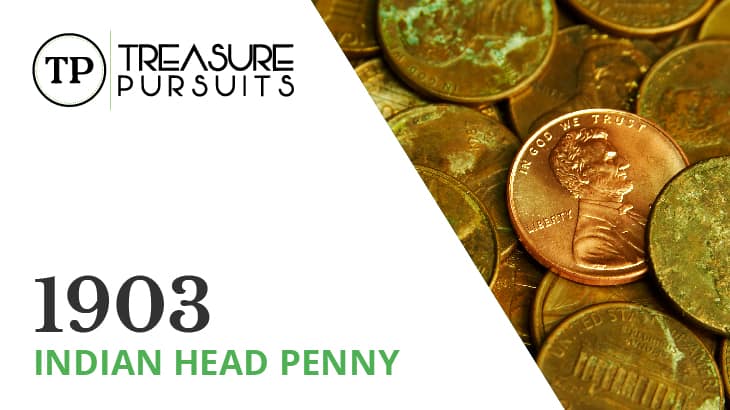 Minted from 1859 to 1909, the Indian Head penny is an iconic and beloved coin series among collectors of all kinds.

The Indian Head penny was designed by James Longacre, who was the Head Engraver at the Philadelphia Mint.

The obverse face of Longacre’s design features a profile bust portrait of Liberty (not truly an “Indian,” as the name suggests) wearing a Native American-style headdress with “LIBERTY” printed on the headband.

Divided between the left and right sides of the coin is the legend “UNITED STATES OF AMERICA,” and below Liberty’s head is the year of mintage.

The reverse design began in 1859 as a simple laurel wreath with the denomination “ONE CENT” in the center. All subsequent mintages have an oak wreath instead with a bundle of arrows at the base and a shield at the top.

Both faces feature a denticled rim, a rim composed of small bumps

The diameter of 19mm remained constant throughout the Indian Head series and on into the Lincoln cent as well.

History of the 1903 Indian Head Penny

1903 is considered a late mintage in the Indian Head penny series, minted only six years before the introduction of the Lincoln cent in 1909.

The Philadelphia Mint reports producing 85,092,703 coins in 1903, a fairly large output for the time. Such large outputs are characteristic of most late Indian Head penny mintages, as factors like the growing popularity of penny arcades increased the demand for cent pieces.

A common feature of Indian Head pennies, including the 1903 mintage, is an effect known as Longacre doubling.

Often seen on numbers and lettering on Indian Head cents, Longacre doubling usually appears in the form of a “lip” or “shoulder” on both sides of the design elements.

Some people mistake this for a double strike, thinking that they have found a doubled die variety. However, whereas doubled die coins are created after a die is hubbed a second time while not lined up perfectly with the first hub, Longacre doubling is simple a result of the design of the master die used for creating other dies.

No one is certain of the exact causes of Longacre doubling. One theory holds that designers would add details to the master die after it was already in place, creating a “lip” on the die. Another theory posits that the lip was created to increase the longevity of used dies.

Whatever the case may be, while true doubled die varieties can be quite valuable, Longacre doubling is very common and does not typically affect the value of an Indian Head penny.

See the below image for an example of Longacre doubling on an 1883 Indian Head penny. Notice also that the doubling can be seen on both sides of the letter in many cases; with a doubled die, the doubled image is usually only seen on one side of the design elements.

If you think you may have a true doubled die Indian Head cent on your hands, have it inspected by a certified coin dealer/trader.

Despite being over 110 years old, 1903 Indian Head pennies remain relatively common. That said, in the right condition, they can still be worth quite a bit.