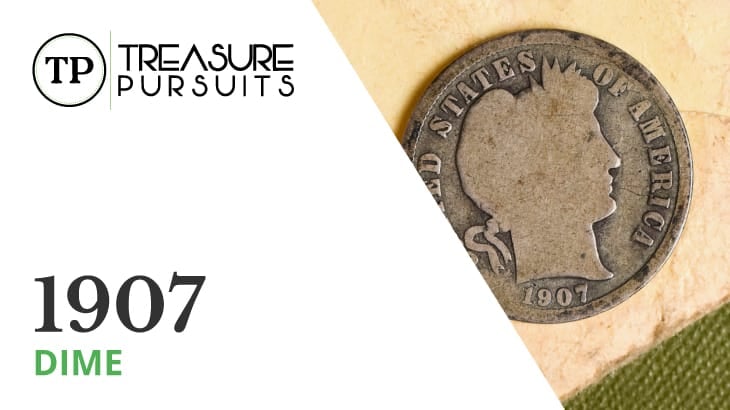 This simple but striking piece of Barber coinage is one of the lesser-known gems of American numismatics.

In the 1880s, the Mint began searching for a new design to replace the unpopular Seated Liberty coinage that had been in usage for half a century. After years of unsuccessful proposals and design competitions, Chief Engraver Charles Barber was appointed to the task.

His design for the obverse of the dime, which was first struck in 1892, was essentially a reworking of the Morgan silver dollar obverse. It features a profile bust portrait of Liberty wearing a phrygian cap and laurel wreath, surrounded by the legend “UNITED STATES OF AMERICA.” The year of mintage appears at the base of the coin.

This obverse design is nearly identical across the Barber coinage, including the Barber quarter and Barber half dollar.

The reverse design is rather simple, consisting of the denomination “ONE DIME” encircled by a wreath composed of wheat, corn, and oak leaves. Both faces have a denticled rim, or a rim of small bumps.

The Barber dime has a composition of 90% silver and 10% copper. It was minted until 1916, when it was replaced with the Mercury dime designed by Adolph Weinmann.

Although not popular with its contemporaries, who viewed the design as simplistic and unoriginal, the Barber dime is widely appreciated by today’s collectors.

History of the 1907 Barber Dime

1907 was the largest issue of the Barber dime, with around 35 million coins struck that year.

22,220,575 of those were struck at the Philadelphia Mint. 5,058,000 were struck at New Orleans, which is one of the less common mint locations as it was only in operation for 53 years throughout the mid-to-late 19th and very early 20th centuries.

Besides being the most widely-coined issue, the 1907 dime is more or less typical for the series in terms of composition, design, and strike quality. That is to say, with the exception of San Francisco issues, these dimes tend not to be fully struck.

Likely owing to the sheer number of coins produced, there are many known varieties for this issue, including doubled die and repunched mint mark varieties.

There is a popular legend that a wagon carrying a shipment of newly-minted 1907 dimes crashed near the Black Canyon in Colorado, spilling thousands of coins irretrievably into the rocky crevasse. This story is unlikely, but it’s nice to imagine being lucky enough to stumble onto this wayward treasure trove!

As is the norm for silver coins, the minimum value for a Barber dime is likely to be its melt value, or its intrinsic worth to a precious metals dealer. Based on the current price of silver, the approximate melt value of the 1907 Barber dime is $1.11.

Numismatically, how much this coin is worth to collectors depends on its grade or condition and where it was minted.

Dimes minted in San Francisco have a similar curve, with modest values in lower grades but, in accordance with rarity, a steep incline when it comes to Uncirculated specimens.