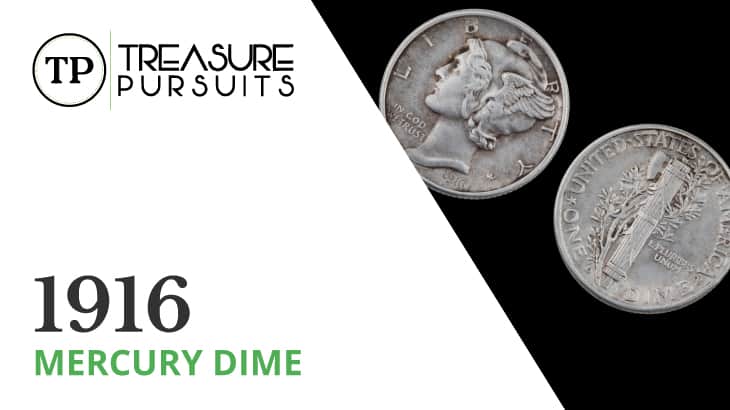 The Winged Liberty Head dime, known more commonly as the Mercury dime, had a short-lived mintage but remains one of the most popular coins to collect today.

The Mercury dime was first struck in 1916, when it replaced the Barber dime that had grown increasingly unpopular in its later years. A contest was held to determine the design of the new coin, and it was Adolph Weinmann’s classically-inspired sketches that won.

The obverse of Weinmann’s design features a profile bust portrait of Liberty wearing a winged Phrygian cap. Although not part of Weinmann’s plan, the portrait bears a resemblance to the Roman god Mercury, hence the name “Mercury dime.”

Around the obverse rim is the legend “LIBERTY,” and to Liberty’s left we find the motto “IN GOD WE TRUST.” The year of mintage is situated at the bottom.

The reverse, drawing further inspiration from classical antiquity, centers on a fasces, an Etruscan-Roman symbol consisting of a bundle of sticks with an ax head at the top, overwrought with an olive branch. The fasces represents authority, strength, and unity, while the olive branch represents peace.

The upper rim reads “UNITED STATES OF AMERICA,” and the lower rim has the denomination “ONE DIME.”

The Mercury dime was only minted until 1945, when the sudden death of President Franklin Roosevelt prompted the creation of the Roosevelt dime.

History of the 1916 Mercury Dime

1916 was the first year of production for the Mercury dime, and, as first years often are, it was fraught with setbacks and design difficulties.

It was ultimately October when Mercury dimes began production, so to satisfy demand for dime pieces, dimes wearing the discontinued Barber design had to be struck for the majority of the year until the new dies were ready.

The Denver issue, due to its scarcity, has become one of the most widely counterfeited coins ever. Anyone looking to buy or sell a 1916-D Mercury dime should make sure it is authenticated by a professional service like PCGS or NGC.

Things to keep an eye out for on supposed Denver mintages are the shape and alignment of the mint mark, the spacing from the other design elements, and any evidence of tooling or tampering.

The mint mark should have prominent serifs with rounded tips, and the hole inside the “D” should be triangular in shape.

One good way to check the shape, other than comparing pictures, is to look at the 1914-D penny, which uses the exact same mint mark.

Tooling lines will appear as scratches or raised lines that are visible on the field and not visible on design elements. They are the result either of tampering with the coin’s design or of trying to fix false die imperfections, and any coin exhibiting tooling lines should be suspect.

Even experienced collectors can be fooled by fakes, especially if they cannot magnify the coin to get a closer look at the mint mark, so there really is no substitute for a professional authentication service.

The minimum value for a 1916 Mercury dime will be its melt value, or how much its silver content is intrinsically worth. With the current spot price of silver, the approximate melt value is $1.10. This is not likely to change with the condition.

As for the numismatic value of the coin, the Philadelphia and San Francisco mintages are still reasonably common in most grades, so values are modest outside of Uncirculated grades.

As a general rule, if the horizontal bands on the reverse fasces show clear, complete dividing lines, that coin is known as a Full Bands or Full Split Bands specimen. A testament to a quality strike, the Full Bands designation can increase the value of your coin.