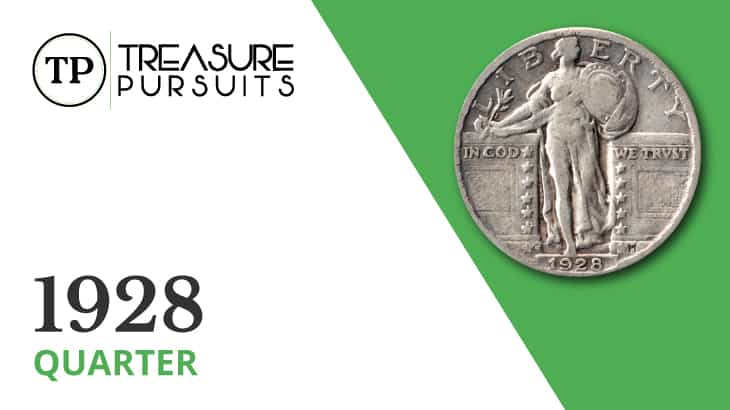 The Standing Liberty quarter, not widely known outside of the numismatic community, is considered one of the most beautiful pieces of American coinage.

President Theodore Roosevelt, in the early 1900s, wanted to beautify American coinage. One result of this mission was the Lincoln cent in 1909. Another was the Standing Liberty quarter, which began production in 1916.

The Standing Liberty quarter replaced the Barber quarter, which was widely regarded as unattractive and uninspired. The new quarter was designed by Hermon Atkins Macneil and draws upon classical art for inspiration.

The obverse of the quarter shows Liberty standing in a flowing dress between two walls that read “IN GOD WE TRUST.” She is holding a shield and an olive branch. The top legend is “LIBERTY,” and the year of mintage is at the bottom.

The reverse depicts an eagle in flight below the legends “UNITED STATES OF AMERICA” and “E PLURIBUS UNUM.” The denomination “QUARTER DOLLAR” rests on the lower rim, and a ring of stars partially decorates the rim.

Although the 1916 and 1917 mintages show Liberty with a bare breast, a design choice which scandalized the public, later 1917 mintages and onward have Liberty in a chain mail vest.

The Standing Liberty quarter was continually modified in minor ways, mostly to reduce wear, for the remainder of its mintage, which ended in 1930. Its successor, the Washington quarter, would be struck two years later.

History of the 1928 Standing Liberty Quarter

The 1928 Standing Liberty Quarter had a relatively modest mintage, with a total number of just over 10 million coins struck across three mints.

Philadelphia was responsible for the production of 6,336,000 quarters. 1928 Philadelphia issues tend to be reasonably well struck, and they are pretty common in grades through MS-64.

Denver produced 1,627,600 quarters in 1928. Unfortunately, strike quality is overall poor, and well-struck high grade specimens can be quite rare. There is a notable repunched mint mark variety for this issue.

2,644,000 quarters were struck in San Francisco. These issues are generally of mediocre strike, but they are plentiful in most grades, even Uncirculated. For unknown reasons, 1928-S quarters show two different sizes of mint mark, one larger than normal, and the other smaller than normal.

Neither the “large S” nor the “small S” brings any particular added value to the coin, but it is an interesting characteristic nonetheless.

As they were minted after 1917, the 1928 issue is of the second type, meaning that Liberty is wearing the chain mail vest. Also, the date is embedded in the recess that was added to reduce wear.

The issue’s composition of 90% silver and 10% copper is typical for the series, as are the diameter of 24.3 millimeters and the mass of 6.25 grams.

In most cases, the value for this issue does not vary meaningfully by mint mark. The most important factor is grade or condition.

MS-65 examples may be worth anywhere from $470 to $520, and the values rise dramatically in higher gem grades.

Another important factor that can raise the value of a Standing Liberty quarter is the strike quality on Liberty’s head. A lot of detail is concentrated in the head design, so only impeccably struck examples allow all the details to be seen.

Such a coin is known as a Full Head (FH) quarter. A FH designation does not necessarily mean that the entire coin is well struck, but it can nonetheless raise the value of a coin considerably.

If you suspect your 1928 quarter would qualify as a Full Head example, it would definitely be worth the time and expense to have it authenticated by a coin-grading service like NGC or PCGS.