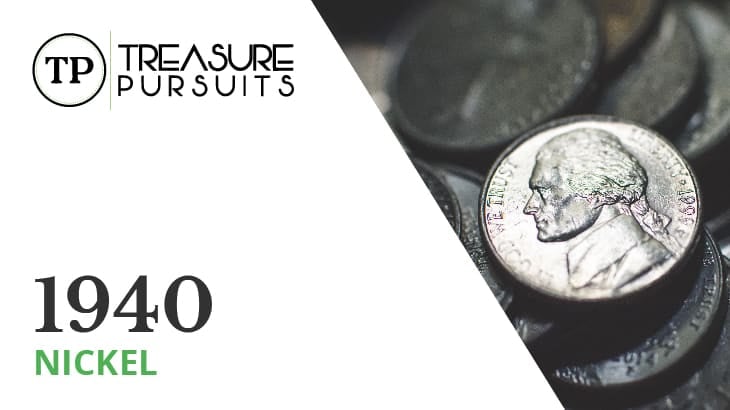 Dates inscribed on the infamous Buffalo Nickel would quickly become worn down and illegible after the circulation process. Following the Buffalo Nickel, the U.S Mint officials decided to make substantial changes to the five cent coin.

In January 1938, the United States Treasury disclosed a competition for the design of the new coin. The new coin was to be called the Jefferson Nickel.

However, due to various revisions required by the Treasury, Schlag’s design was not approved until late July 1938. This led to the contest results not being announced until September 1938. Editions as early as the 1940 are popular amongst coin collectors.

The original design ran through 1938-2003. Jefferson Nickels were primarily made of 75% copper and 25% nickel. After 1942, War-Time effort called for a different metallic composition. The new alloy composition consisted of a mixture of 56% copper, 35% silver, and 9% manganese.

In the original design, Schlag depicted a side-view of Thomas Jefferson on the front, and a view of his home, Monticello, on the reverse. A few variations of Jefferson Nickels do not include the Monticello view on the back, such as the Westward Journey designs.

Despite these factors, the original design is still being used today.

There are four main tiers on the grading scale for the 1940 Jefferson Nickel. The top tier would be Uncirculated coins. For a coin to be considered uncirculated, it would need to be nearly flawless as if it had just been minted. These coins would look as if they hadn’t been touched by human hands or exchanged in everyday use.

The next tier would be Extremely Fine. These are also popular amongst coin collectors. The minimal damage on these coins would be invisible to the naked eye. Unlike the Uncirculated coins, these would exhibit some signs of use over the years.

Following the Extremely Fine tier would be Fine. The signs of wear and damage are more noticeable with this coin. However, the damage still does not interfere with the purity of the coin’s image or inscriptions.

Finally, the final tier would be Good. Most nickels are considered to be in this condition. Coins on this tier will have many scratches and blemishes. Coins of this edition may be sought out, depending on the year and edition.

However, Jefferson Nickels also have a grading system unique to the coin. FS or Full Step coins, refers to the number of visible steps leading up to the Monticello on the reverse. This entails that a proper FS Jefferson Nickel would have at least five clearly defined steps.

The average pricing range of the Jefferson Nickel can be anywhere from $0.10 to over $6,000, based on a combination of condition, edition, and strike. Let’s not forget to mention the notorious FS label, as mentioned above, which also affects the pricing.

Following the above mentioned tiers on the grading scale for this coin, the most pristine condition would be labeled as a Proof Coin. These coins would appear to be freshly minted with a stronger shine or luster than uncirculated coins.

Proof Coins will have been struck twice, rather than once, in order to maintain a shinier, cleaner appearance. These coins are the most popular amongst collectors and their values are significantly higher than uncirculated coin.

Jefferson Nickels can be further separated into five different eras; called types. Each type represents revisions or design improvements. Major revisions include the change in composition that occurs after 1942 for select coins.

The first era is referred to as Type 1: Original Design Vintage (1938-1964). These consisted of Schlag’s original design and ran until 2003. The small distinction between this era and the Modern era, mentioned directly below, is insignificant.

Next, there is Type 1: Original Design Modern (1965-2003). This series serves as a continuation of the original design, following the break that coincided with the removal of silver in other coins.

The third era is called Type 2: Silver Alloy (1942-1945). As the name implies, these Jefferson Nickels consisted of the new alloy composition. In order to indicate the change in alloy composition, the U.S Mint placed a mint-mark above the Monticello. This was also the first time a coin used a letter P to distinguish Philadelphia mint.

Then, the fourth era is called Type 3: Westward Journey (2004-2005). This design series commemorated a few milestones in the Western side of the U.S. These individual designs include; the celebration of the 200th anniversary of Lewis and Clark’s expedition, a depiction of an Indian Peace Medal, the keel boat used on Lewis and Clark’s journey, and western waters featuring a view of the pacific ocean.

Finally, the last era is called Type 4: Return to Monticello (2006-Present). After the completion of the Westward Journey series, the U.S Mint decided to return to a similar theme. The new design features Thomas Jefferson facing slightly forward, while the reverse features the classic Monticello design.