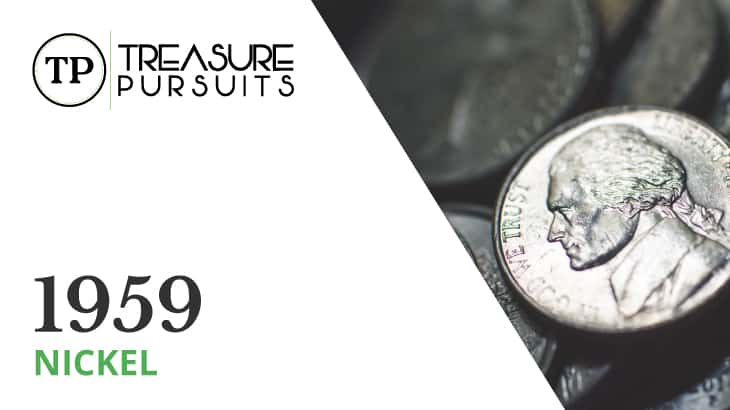 A coin still in circulation but with a long history behind it, the Jefferson nickel is a nice coin for beginning collectors due to its availability.

The Jefferson nickel was first minted in 1938, when it replaced the Buffalo nickel that, while very popular among numismatists and citizens alike, had been difficult to strike.

Following in the footsteps of other coins like the Lincoln cent and the Washington quarter, Felix Schlag designed the Jefferson nickel to pay tribute to a founding father and former US president.

Schlag’s obverse features a profile bust portrait of Jefferson facing left. On the left rim is the motto “IN GOD WE TRUST,” and on the right rim are the legend “LIBERTY” and the year of mintage.

The reverse depicts Jefferson’s home, Monticello, along with the legends “E PLURIBUS UNUM” and “UNITED STATES OF AMERICA.” The denomination “FIVE CENTS” appears below Monticello.

Although it was unaltered for long after its creation, the design has been subject to change in recent decades.

2004 and 2005 saw the production of several nickel designs commemorating the history of westward expansion, and in 2006, Schlag’s Monticello reverse returned, partnered with a new forward-facing Jefferson that has been in use since.

The composition of the Jefferson nickel consists of 75% copper and 25% nickel. This was changed to a combination of silver, copper, and manganese from 1942 to 1945 to conserve nickel for the war effort.

See our Ultimate Guide to Rare Nickels for more information on collecting nickels!

History of the 1959 Jefferson Nickel

In 1959 the Jefferson nickel was struck only in two locations: Denver and Philadelphia. Denver minted by far the most nickels this year, with a total of 160,738,240. Philadelphia produced a comparatively small 28,397,291 nickels.

Denver issues are, on the whole, poorly struck. Well-made examples can be found, but the vast majority show weak strikes and blurry details.

Philadelphia issues, on the other hand, come in a wide variety of qualities, so the discerning collector should keep an eye out for well-struck examples.

Both issues are relatively common in most grades, although the Philadelphia issues are obviously a bit less common due to their lower mintage.

The 1959 nickel features the pre-war composition of 75% copper and 25% nickel, and the design is typical for pre-2004 Jefferson nickels.

Several minor repunched mint mark varieties and doubled-die varieties are known for this issue, but none that are particularly notable or that bring a high premium.

One interesting variety that can add some value is what is known as the “black beauty” nickel. These nickels are the result of improper annealment, the process by which planchets are heated to prepare them for striking.

It seems these nickels were left in the furnace a bit too long, producing a darker color that can range from gunmetal gray to jet black. Improper annealment can be found in all denominations, but 1959 nickels are particularly known for this error.

Black beauties do not differentiate themselves much in terms of value unless they are in higher grades, where they can be worth a bit more due to their unique error.

The 1959 Jefferson nickel still sees some circulation today, so its numismatic value is often very low. Indeed, the average specimen is not worth above face value. However, nickels of exceptional strike and grade can still bring nice premiums.

1959 nickels do not typically surpass face value until you reach the Uncirculated grades. Uncirculated (MS-60) examples are valued at $0.25; MS-65 examples from Denver are worth $8.25, and MS-65 Philadelphia mintages are worth $10. Average proof strikes are worth $2.98.

Specimens over MS-65 may be worth up to $100 or more. This is especially the case when they exhibit what are known as Full Steps. In order to qualify as Full Steps (FS), the steps on the reverse Monticello device must be fully divided into at least five clear steps.

NGC further qualifies FS coins as either 5FS or 6FS based on how many full steps are visible. A coin with Full Steps is a specimen of high strike quality and is very desirable for collectors of the Jefferson nickel.

To illustrate the difference in value that a Full Steps designation can make, let’s look at the MS-66 grade. An MS-66 Denver mintage is worth $75. The same coin with Full Steps is worth $1,500!