The 1964 Kennedy Half Dollar was minted following the assassination of President Kennedy in 1963. The most common and best explanation for the change in design comes directly from then Chief Engraver of the United States Mint, the late Gilroy Roberts:

“Shortly after the tragedy of President Kennedy’s death, November 22, 1963, Miss Eva Adams, the Director of the Mint, telephoned me at the Philadelphia Mint and explained that serious consideration was being given to placing President Kennedy’s portrait on a new design U.S. silver coin and that the quarter dollar, half dollar or the one dollar were under discussion.

“A day or so later, about November 27, Miss Adams called again and informed me that the half dollar had been chosen for the new design, that Mrs. Kennedy did not want to replace Washington’s portrait on the quarter dollar. Also it had been decided to use the profile portrait that appears on our Mint list medal for President Kennedy and the President’s Seal that has been used on the reverse of this and other Mint medals.”

Gilroy Roberts immediately began sculpting the portrait on the obverse side, while his Assistant Engraver, Frank Gasparro, sculpted the presidential seal for the reverse side. Under the law, coin designs could not be changed more frequently than every 25 years, so changing the design would be a challenge, because the Franklin half was then only 15 years old. Congress undertook a bipartisan effort to pass The Act of December 30, 1963 allowing the half dollar’s design to be changed after only a few weeks’ debate.

The first proofs of the Kennedy Half Dollars were coined early in 1964 and the Denver Mint began production of the regular minting of these coins by January 30th with the Philadelphia Mint minting them starting the week after. Following minting, the coins were released to the public on March 24, 1964. Because the coins were so anticipated, banks were quickly unable to keep Kennedy Half Dollars on hand, even with limiting the number of coins sold to each individual. As a result, few of the half dollars were ever actually circulated.

Throughout the issuance of the Half Dollar, the US mint produced them with a large silver composition, as was common, which, as the price of silver increased, induced collectors and investors to seek-out these Half Dollars, particularly following the passage of the Coinage Act of 1965.

As of now, the 1964 Kennedy Half Dollar is desired by collectors due to the coin’s uniqueness in being the first in this run. The Half Dollar is composed of 90% silver with the remaining 10% being copper.

The Kennedy Half Dollar is still being produced by the US mint in proof sets.

History of the Kennedy Half Dollar

The 1964 issue was a direct result of the rising demand for coinage as the economy was experiencing substantial stability and growth.

Both issues can be found in Mint State.

As part of the initial design process, a small run of proof coins were made known as the 1964 Accented Hair proof Kennedy half dollar. This popular collector’s item features additional details in Kennedy’s hair which Mrs. Kennedy requested to be removed. Because the mint pulled the dies with this enhanced hair detail early in the minting run, it’s estimated that only 2% of 1964 proof Kennedy half dollars were minted with this feature.

As stated above, the 1964 Kennedy Half Dollar was minted in great numbers, which means a coordinating number of proof coins being minted. As with many coins, a proof coin of the 1964 Half Dollars fetches a higher price than even an uncirculated coin as the proofs are shinier and more detailed.

Philadelphia minted 3,950,762 proofs of the 1964 Kennedy Half Dollar. And because of this large number of proofs being minted, there are a significant number still available.

Valuing the 1964 Kennedy Half Dollar

Roughly, this coins value, in average condition, can be estimated to be valued at about $10, while a 1964 Kennedy Half Dollar in certified mint state (MS+) condition might auction for as much as $42*. 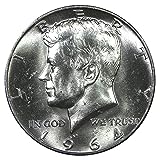 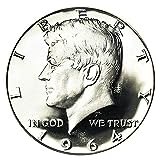 Although this coin is generally valued higher to collectors than the value of the silver component, it is still worth noting that the coin’s intrinsic value in just silver is still higher than face value, if not by a large amount, at least by some amount.

Silver’s current demands are primarily for industrial applications and investments. Silver continues to be valued highly on the market around the world, as clearly evident by the averages and NYSE.

As with any other commodity, silver’s price is primarily based on supply, demand and speculation, so when investing in silver coinage, risks must be assumed. Fluctuations in the value of silver typically occur because of changes in use and production, meaning that what happens in the mining fields and in the industry using silver in industrial applications may widely impact the value of silver.

* This estimated value does not reference any standard coin grading scale. So, when we state ‘average’, this is meant to mean ‘in a similar condition to other coins issued in 1964, and ‘mint state’ meaning the coin has been certified MS+ by one of the top coin grading companies.