Is it Illegal to Dumpster Dive in North Carolina? No, it isn’t, however, each municipality is entitled to its own set of rules.

If you’re planning to dumpster dive for some cool finds you should become familiar with the area you’re scavenging and what the rules are.

In this article we have taken the time to do some of the research for you. To get you started, we have pulled apart some of the laws in the state and we have researched four of the biggest cities in North Carolina where you might want to explore.

When you’re finished, we hope you will have a better understanding and you should be able to answer your own question, is it illegal to dumpster dive in North Carolina? 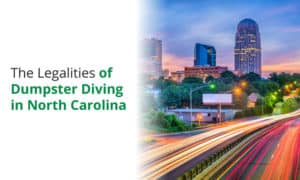 The case of California vs. Greenwood permits dumpster diving in every state throughout the United States. This law went into effect in 1988 after the Laguna Beach Police Department ordered the bags of trash left on the curb in front of Greenwood’s home to be used as evidence in their search for illegal drugs.

While doing a great amount of research to find out if it is illegal to dumpster dive in North Carolina, we contacted the Field Operations Department of Greensboro. It was from that department where we learned there is no known law or regulation in the state that says it is illegal. They did say though, that most dumpsters are kept on private property and they might even be locked up behind a fence, so that would then be considered trespassing which is a law in the state. We will cover the penalties for trespassing later.

Although the federal law states that it is legal to dumpster dive across the map, each state has the right to their own local ordinance where you might find that it is illegal in certain cities.

We have taken the time to research the four biggest cities in North Carolina so that you will have the knowledge you need before diving in.

Is it Illegal to Dumpster Dive in Charlotte? 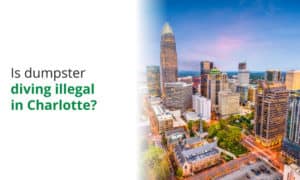 According to the Charlotte code of ordinance 10-28, it is prohibited to remove any waste that is placed at the curb for collection unless they have been given the authority by the city.

Is it Illegal to Dumpster Dive in Raleigh? 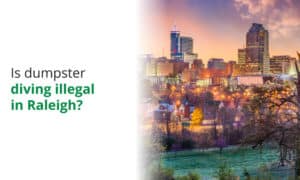 During our research we could not find any law or ordinance stating that it is illegal to dumpster dive in the city of Raleigh. Since we were unable to find an ordinance stating otherwise, we will assume it is legal, however, you will want to be careful not to break other laws while diving in because then it can become illegal.

Is it Illegal to Dumpster Dive in Greensboro? 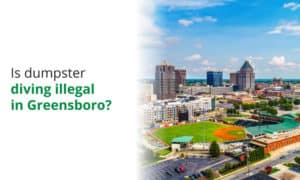 The Field Operations Department of Greensboro also told us that there are no known laws or ordinances in the city stating that it is illegal to dumpster dive in Greensboro. They did make it a note to tell us that most of the dumpsters are kept on private property and it is considered trespassing even if there are no signs posted because it is against the law to enter onto private property. They told us that there have been cases where people were found inside the dumpsters on private property and charges were filed against the people, so you must take that into consideration before going in head first.

Is it Illegal to Dumpster Dive in Durham? 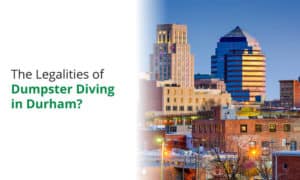 Violations and Penalties for Dumpster Diving in North Carolina

As previously mentioned, trespassing is considered a criminal offense; there are two degrees to trespassing and you can be slapped with fines of $1000 or more depending on the degree of the crime. You can also expect to spend up to 150 days in jail.

Most of the dumpsters are located on private property and the owners don’t have to post a “No Trespassing” sign for it to be illegal because it is automatically considered trespassing when you step foot onto private property.

You might not realize that even if you do have permission to be in a dumpster, there are vandalism laws that you will need to consider. In the state of North Carolina one of the most common charges is injury to real property. What does that mean exactly? It refers to anything that is fixed to the land; fences and buildings are perfect examples. If you’re throwing things from the dumpster and you damage a fence or break a window, you can be charged with vandalism. If the court proves that you willfully or wantonly damaged, injured, or destroyed the property, you could be charged with a class 1 misdemeanor and you will face hefty fines along with some jail time.

The best thing you can do is be honest if you make a mistake, but more importantly just be careful not to destroy the property you are on.

Something you might not think about is littering laws. If you don’t clean up after yourself, you could be faced with fines up to $1000 and that’s just for a 1st offense. If you’ve been caught littering in the past, then you might be required to do community service and pay a fine as high as $2000.

Consider taking a broom and a dustpan with you to clean up your mess before you leave the area.

Disorderly conduct in North Carolina is considered a class 2 misdemeanor and you will be looking at jail time if you are charged with this crime.

Disorderly conduct is an action that causes a disturbance to other people. There are many things that fall under this category, but the ones that relate to dumpster diving the most are:

Identity theft is also a crime. If you are caught stealing another person’s personal information for the use of opening credit accounts and other vicious acts of crimes, you can be sentenced up to 80 months in jail and facing fines of up to $50,000. In the state of North Carolina, the victim is also entitled to sue for damages in a civil court.

If you want to go dumpster diving in the state of North Carolina, you should consider a few things before you set out on your adventure.

Before diving in for the fun stuff, take into consideration the following safety tips:

So, is it illegal to dumpster dive in North Carolina? Technically no, it is not, but just like every state, there are separate ordinances in each municipality. Make sure you know where the dumpster is located and the laws in that area before you take a chance of committing a crime. Remember that most of the dumpsters are situated on private property and there doesn’t have to be a sign posted for you to be considered trespassing onto the property.

If you are curious or you need more information, the North Carolina Department of Environmental Quality can answer your questions.

Check out our article on the best places to dumpster dive.