In 2016, Forbes published a story about an eighth-grade student who was ‘arrested’ for using a $2 bill to pay for lunch at her school cafeteria. The situation was finally resolved after police officers traced the origin of the bill to a convenience store and then to the bank for verification of authenticity. The story, although traumatizing to the girl, shows how little is known about $2 bills.

There are currently about a billion two-dollar bills in circulation today, and yet people always look at them with suspicion. So whether you’re a collector or just looking to know more about this rare bill, stick around to learn everything you need to know about it. In particular, we shall be discussing the 1953 series of the $2 bill. You see, these bills are released according to a series depending on the year they were printed, and they all have unique quirks.

Everything you need to know about $2 bills

Two-dollar bills were first introduced by the US Treasury in 1862, although as a United States note. US notes were used up until 1971 when they were phased out with the abolition of gold and silver use. Also, the bill used a large format standard up to 1928 when all notes were changed to a smaller size the same as we have today.

How does it look?

The overall design of the two-dollar bill has always shifted over the years from its launch. At first, the obverse (front) side featured a portrait of Alexander Hamilton, but then it was changed to that of Thomas Jefferson from 1869. To date, this has remained to be the standard design on the front of the note.

On the reverse (back) side, Jefferson’s home in Monticello was featured as a vignette from 1928 when bills were changed to the smaller version. This remained to be a consistent design until 1966 when the $2 and $5 United States notes were discontinued. Upon the relaunch of the $2 bill in 1976, the reverse side was changed to a vignette of the signing of the Declaration of Independence, a depiction by John Trumbull.

From then on, the design of the bill has remained largely the same except for a few minor adjustments here and there. Every time there is a change in design, a new series of the bill is issued. The latest issue printed was the 2013 series that was produced between 2013 in Atlanta and as late as November 2018 in Atlanta and San Fransisco. According to the Bureau of Engraving and Printing, there are no planned redesigns for the $2 bill, and the 2013 series may be the final design.

It is very important to know about the design of this note because dealers have been known to print two-dollar bills on their own. They even make certain modifications and claim they are ‘enhanced’ in order to commemorate certain national parks or people. However, the Bureau of Engraving and Printing has never done so and you should not be fooled.

Is it legal to use?

The story mentioned above is tragic because it illustrates just how much skepticism surrounds the two-dollar bill. Despite there being about a billion of them in circulation, many people never get to see them. First, because a billion bills is not a lot compared to over 10 billion $1 and $100 bills in circulation. Second, because some people have been known to hoard them believing they are more valuable than the printed value.

Nevertheless, you should know that the $2 bill is legal tender and you are free to use it at any establishment. The reason the notes were discontinued in 1966 was that they were not popular or used often enough. Then they were reintroduced in order to cover inflation pressure, and the US Treasury is still trying to make the bill more popular for this reason because it would reduce production costs. 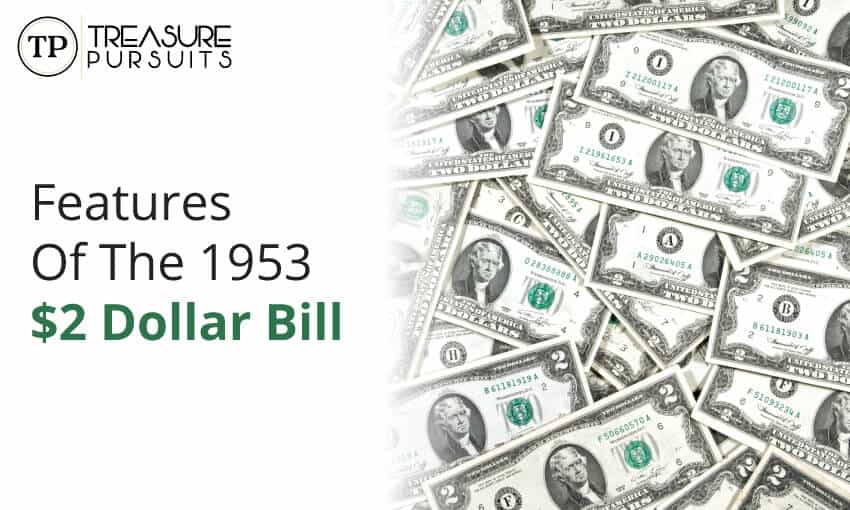 Two-dollar bills as Federal Reserve notes were introduced in 1976 (check out our article on the 1976 $2 bill value for more information). This means that the 1953 $2 bill is a United States note. That being said, it is still legal tender and can still be used to make purchases. However, if you happen to have one, you may want to hang on to it before using it to buy a coffee.

Because it is a US note rather than a Federal Reserve note, the seal and serial numbers are printed in red ink. In some cases, the serial number may even feature a star at the end instead of a number and this can make a note even rarer and valuable because there are only a few such bills.

About 79.9 million bills were printed, and an additional 3.9 million star notes. Of these, there were different signatories, thus the bill can be classified into 4 different series: 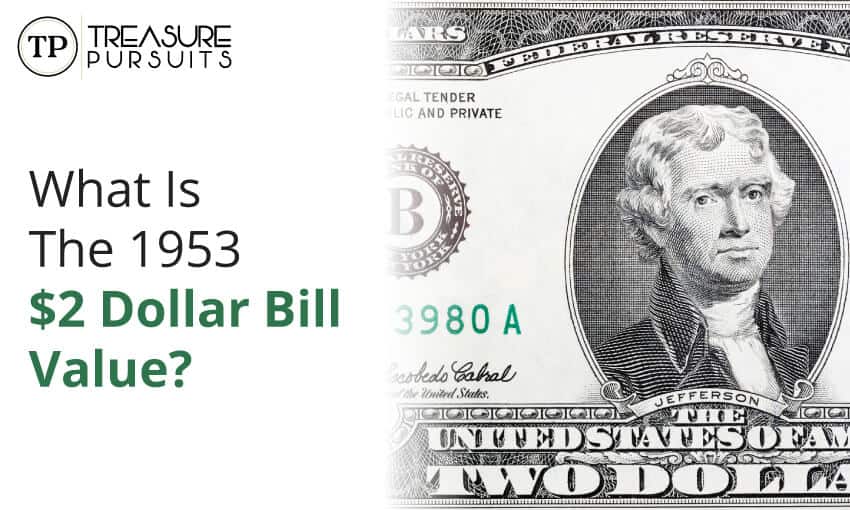 A 1953 $2 bill is worth about $8 regardless of the series in which it falls. Star notes are a bit more valuable at around $10 as well as any bill with a unique serial number. This is quite a jump in value, especially if you have several notes stashed away.

Where can I buy some?

For a collector, the idea is to get the most unique bills, and this usually means visiting a coin collector. Chances are they will have some 1953 $2 bills in their possession you can buy. Another easy option is to visit online stores like eBay where there are always individuals selling their notes. You may even be lucky enough a very unique bill to always treasure.

On the other hand, if you just want a bunch of bills to use and raise a few eyebrows, there are various merchants online who sell a bunch of notes at a god price and you can get a good haul of twos.