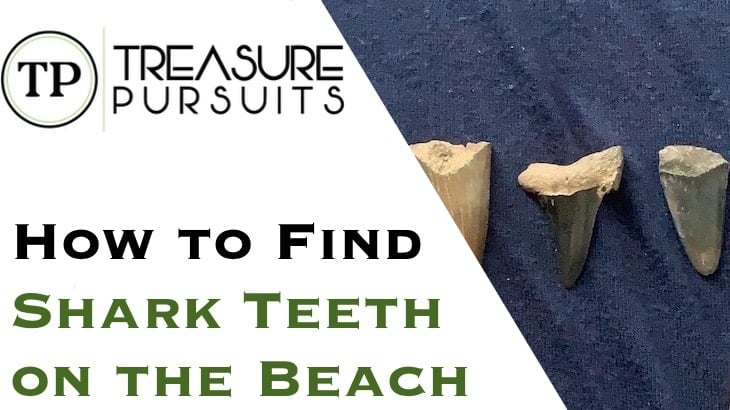 One of the best activities I’ve ever taken with my kiddos at the beach has been hunting for shark teeth. Not only are they obsessed, but figuring out how to find shark teeth on the beach was way easier than I thought–making a fun activity we can all participate in.

Plus, if you’re looking for a souvenir from the beach, what better one than something you found yourself in the surf?! Super easy and simple enough that the kiddos can do it on their own, if they’re interested, hunting for shark’s teeth on the beach is such an awesome activity, anyone can do it.

How to Find Shark Teeth on the Beach

There’s no reason to believe that just because you’re not Indiana Jones that you can’t find some shark teeth at the beach, whether fossilized or new. It doesn’t take an archeologist to figure out that these things can often be found on the surface, or just an inch or two into the sand.

Because sharks shed their teeth at what would be to us, an astonishing rate (I mean, can you imagine losing 30,000 teeth over your lifetime?! eesh!) that means that there are a ton of teeth literally just falling out of shark’s mouths at any given time in the ocean.

So, grab your beach-going gear and put on some sunscreen, because you’re about to find your first shark tooth on the beach!

What Beaches are the Best for Finding Shark Teeth?

Any beach on the ocean is liable to have some shark teeth. Shark (all but one and let’s just not go there for now) live in saltwater and they generally hunt in both the deep and shallow waters close and far away from the shore. So, you’re as liable to find their teeth on the shores all over the world.

As far as the US goes, some people swear by the beaches in Florida, while other people have found loads of shark’s teeth in California, DC, Washington State, and along the gulf coast in Texas and Louisiana. So, anywhere you go along the ocean shores, you can find shark teeth.

All of that being said, you can bet that finding a shark’s tooth is not always fast. I have a friend who lived near the beach in Florida for most of his childhood, went to the beach almost every weekend to hunt for shells and shark’s teeth–and he never found a single one.

But, he probably also hadn’t followed this basic guide to finding shark teeth on the beach.

My favorite tricks to find shark teeth at the beach are super simple:

Be prepared for a long hunt. Sometimes, it’s a few minutes, but most of the time, it’s going to take a while. Even a couple of hours. So, stay hydrated and bring some sunscreen. This is a great post–lunch activity or you can even bring lunch and have a picnic on the beach. But the idea is to plan on being there a while.

Know what you’re hunting. Sharks teeth aren’t all exactly the same. Some (the newer ones) are white or yellowish, maybe even brown, Older shark teeth fossils are almost always black in color. Regardless of color, you can generally rely on the ones you find on the beach or shore to be about ⅛-inch to 3/4 -inch long–and even longer than that if you’re hunting a little further away from the shore. Some shark’s teeth are a long triangle without a top and some are more like a “y” shape. But, like human teeth, not all teeth in a single shark’s mouth are all the same. So, identifying them can be difficult, but worthwhile. It may be worth looking at a shark’s teeth photo guide before going hunting.

Look for the obvious. Start by walking the tide lines while hunting for those older fossils of shark teeth–the black triangles of ancient sharks. Keeping this shape and color in mind is going to score you your first shark tooth almost every time because those little black triangles are not camouflage against the light beige of the beach sand. And while not all fossilized shark teeth are a perfect triangle shape, you can bet that most are. So, once you’ve got your eye looking out for black triangles, that’s going to stick out to you like a sore thumb against the brown sand and rounded shell shapes.

Sift like a prospector. If you’ve found a promising location with lots of shells and debris that rolled up with the tide, bring a sifter. Not like a flour sifter, more like a colander or what you’d imagine a prospector using. You can make a quick sifter by stringing some metal mesh between some pool noodles if you’d like to bring a dedicated shark tooth sifter with you to the beach.

Check for permits. Before you select your beach to go hunting, you will want to check and see if a permit is required before you go searching for fossils. Although there are a lot of new shark teeth out there, the vast majority of shark’s teeth that you find on the beach will be fossils. So, to make sure you’re not violating any local or state rules, make sure to check with the local government or park managers to see if a permit is required.

A Master’s Tricks to Find Shark Teeth on the Beach

Ask a local for their hot-spots. Speaking of checking for permitting requirements, it’s a great idea to contact some locals to see if there are some better spots than others to find what you’re looking for. They may be able to tell you where they personally have found some or where the best spots to check out might be. They can even sometimes give you insight into whether or not there are times that are better to go out and avoid crowds. Even if you don’t have a friend in the area, you can often ask the beach parking lot attendants, concierge at your hotel or even the server at the local restaurant.

Get wet–by wading. There’s no reason you shouldn’t take advantage of the waves and wade out a little ways to see if you can find some sharks teeth a little way out from the water line. If there are any sandbars visible at low tie, these can be a great place to find teeth or other fossils, as they will often get trapped and collect between sandbars and the shoreline in the valleys. If you’re brave enough to take your shoes off, you can take advantage of feeling the sand with your toes–but always be careful of potential sting rays or flounders in the sand.

Get wet–by snorkeling. If you’re not willing to use your toes to feel the sand under the waves in search of shark teeth, you can always don a mask and snorkel, floating above the sandy bottom to look for your prey. This is particularly fun to do in clearer waters like those found on the west coast of Florida in Sarasota, Clearwater or St. Pete Beach. You can use your fingers to sift through the sand on the bottom or just look for a likely deposit, then sift through it. Either way, be careful not to let the tie pull you out while you snorkel and definitely be aware of the potential string rays or flounders that might be hiding in the sand.

Hit the beach after the storm. The fact that the waves are always bringing up new treasures would logically mean that having a storm that whips up the waves will bring a ton more fun stuff. So, if you can go on a shark tooth hunt following high winds or a storm, you’re likely to find a lot more goodies.

Look for dredge areas. Dredging is when the local government or the like goes out to the deeper areas and actually pumps fresh sand up into the beaches. So, if you can find an area that is a recent dredge, you’re likely to find a ton of new finds including shark teeth!

If you find one, there’s more. If you find a shark’s tooth, it’s likely that the conditions are right that, in the same vicinity, you’ll find more. So, keep digging, sifting or whatever you did that was successful, because there might be more.

When is the Best Time to Hunt for Shark Teeth on the Beach?

There’s no “best time” that’s guaranteed to get you a shark tooth. If you want a guarantee, you just need to hit a store. But if you’re wanting a more likely find, you’ll want to be the first on the beach. So, go early before the crowds hit. And if you’re really trying to avoid the crowd, think about doing your fossil hunt on the weekday instead of hitting the beach on the weekend.

Going a little deeper into the “when is the right time to hunt for shark teeth”, you are more likely to be successful during low tide, right before and right after high tide. During low tide, the water is more calm and clear, so you have better visibility. Plus, the areas exposed by the receding waters, the drop-offs just along the shore line (a “wash-in”) creates a rocky sediment collection area where you can find lots of rocks and shells–and shark teeth.

Basically, hunting for shark teeth can be fun and easy, as long as you follow these simple tricks and tips. Plus, it’s a great activity to pass time at the beach!

Tips to Find things at the Beach: