The 1907 Barber Quarter, featuring Lady Liberty, is a well-loved coin by collectors and investors, alike, with an interesting history and origin story.

This category of the barber quarter had a fairly short run of 25 years of production from the US mint. It was first minted in 1892, following a contest held to replace the design of the long-standing Seated Liberty Quarter.

The Barber Quarter was designed by Charles Edward Barber. Depicting Lady Liberty, on the obverse side and the bald eagle on the reverse side in imitation of the Great Seal of the United States where the eagle has outstretched wings, holding an olive branch with thirteen leaves in its right claw and a bundle of thirteen arrows in its left.

The demand for new quarter dollars was not very high in the years preceding the 1907 minting.  As a result, no quarter dollars were coined by the San Francisco mint in 1906, as a result, the few that were produced are the more valuable and highly sought mintings by collectors from 1907 Barber Quarters.

In 1887, the Mint Director determined that the coinage of the United States was in need of a facelift. As a result, a bill was passed in 1890, allowing the Treasury Department to redesign coins without first obtaining Congressional approval, so long as the design had been in circulation for 25 years at a minimum. Thus the Seated Liberty dime, quarter and half dollar were slated for redesign, as they met this minimum circulation requirement.

The Treasury Department created a competition to determine the new coin designs, with the Barber Quarter’s ultimate designer being one of the judges of the competition. Of course, as can be surmised, the competition was not a success.

When the Barber Quarters were initially struck beginning in January 1892, there was a problem with the coins stacking one on top of the other. It took a bit of adjustment of the design, reducing the relief, etc. to resolve the stacking issues. Therefore, there ended up being two versions of the Barber Quarter, in that first year.

By the time the minting reached the 1907 minting, a third version had been developed.

Between 1892 and 1916, almost 265 million pieces were minted at the mints in Philadelphia (no mintmark), San Francisco (S) and New Orleans (O). Proofs of the Barber Quarter were minted with more than 17,000.

The Barber Quarter minting process was done with a new, innovative manufacturing change in order to allow for greater precision of design elements. This lead to some exploration on the designer’s part, ultimately causing the coin to receive some criticism for being “too cluttered.”

After the Barber Quarter had been in circulation for 25 years in 1916, the US Mint held a new contest to replace this design with a new one.

History of the 1907 Barber Quarter

Denver struck by far the most: 2,484,000. This was almost double the amount struck by San Francisco, which struck 1,360,000 quarters. While Philadelphia did strike Barber Quarters in 1907, there were only 575 that came out of that mint.

The San Francisco mint did not produce any quarters in 1906, and because demand did not increase substantially, production stayed low. Although this isn’t a rare instance, this does make it more difficult for collectors to find higher graded pieces from this minting. So, with a scarcity of mint-grade coins, there are fewer gems. However because the Barber Quarters from San Francisco were well-struck, there is a higher likelihood of finding the lesser quality, but still valuable, 1907 quarters.

In Denver, the Barber Quarter was less well struck and many of the deeper portions of the die cavities were not filled completely, leaving Lady Liberty’s forehead and the bald eagle’s left claw and/or arrows in the left claw featureless. As a result, even though there were a significant number of quarters minted, the 1907-D Barber Quarter is difficult to find in any but the lowest grades. One more desirable variety is the obverse doubled die Barber Quarter with Lady Liberty on both sides of the coin.

Philadelphia minting was limited to proofs, discussed in detail below.

Want to know more about the barber quarter as well as other collectible US Quarters? Be sure to check out our Ultimate Guide to Collectible Quarters.

The 1907 Barber Quarter had a very limited number of proofs struck, only 575 from the Philadelphia mint.  Because sales of proof coins had been dropping, the sales of proofs in 1907 dropped 15% over 1906’s mintage. Many of these proofs have been maintained in mint condition and, though not rare to find, are more difficult to locate. 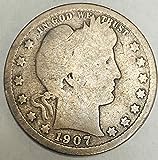 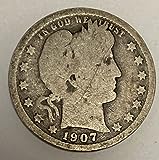 Roughly, this coins value, in average condition, can be estimated to be valued at about $10, while a 1907 Barber Quarter in certified mint state (MS+) condition might auction for as much as $1,900*.

Although proofs, on average, are estimated to be valued between $750-$850.

Although this coin is valued higher to collectors than the value of the silver component, it is still worth noting that the coin’s intrinsic value in just silver is still higher than face value, as it’s melt value is around $3.30 because it has .1808 OZ of Silver.

* This estimated value does not reference any standard coin grading scale. So, when we state ‘average’, this is meant to mean ‘in a similar condition to other coins issued in 1907’, and ‘mint state’ meaning the coin has been certified MS+ by one of the top coin grading companies.

If you are new to collecting barber quarters or any other quarter, be sure to check out our Ultimate Guide to Collectible Quarters.