The 1954 Nickel, generally known as the Jefferson Five Cents, featuring Thomas Jefferson, is a coin that is relatively common and is of interest to collectors with specific attention to coins of high quality strike, because of the overuse of dies throughout the production run.

This category of nickel had a long run of production from the US mint that’s not quite done yet. It was first minted in 1938 through the present and is a long-standing and honored coin design. A lasting testament to one of the founding fathers, the Jefferson nickel is still being minted after 80 years.

The Jefferson Nickel series category has several valuable and collectible coins with special features that make them unique and scarce. Generally, if a coin is struck with less than 10 million in total, it is considered unique and scarce. That is generally what numismatists look for, the unique and scarce, which are worth several times their face value.

The most valuable Jefferson Nickels are those from 1938 to the 1960s.

The Jefferson Five Cents was designed by Felix Schlag. Depicting Thomas Jefferson on the obverse side and the front elevation view of his home, with its name ‘MONTICELLO’ beneath it on the reverse side, this coin’s design was selected as part of a coin design contest in 1938.

The design has evolved throughout the coin’s long mintage. The original design was replaced in 2004 with a series of designs commemorating westward expansion. Then, in 2006 Schlag’s reverse design returned, and the obverse was replaced by the forward-facing Jefferson that is still used today.

The composition of the Jefferson nickel is 75% copper and 25% nickel, with the exception of the Wartime nickels, struck from 1942 to 1945, which featured a mix of copper, silver, and manganese.

The Jefferson nickel began in 1938 as the successor to the beloved but notoriously difficult to produce Buffalo nickel. The design was completed by Felix Schlag and was intended to honor Thomas Jefferson.

The demand for new nickels was not very high in the years preceding the 1954 minting.  As a result, no nickels were coined by the San Francisco mint after 1954 for a period of 10 years, which does make this year’s minting more unique than others, to collectors.

No Jefferson Nickels are truly rare, though, as the Jefferson Nickel category runs concurrently with the Great Depression and World Wars, during which Americans made concerted efforts to preserve whole rolls and even bags of uncirculated coins every year. As a result, collectors look not for date rarity, but on the rare quality of the Jefferson Nickels. Prior to the 1980’s when the depth of strike was actually modified, most Jefferson Nickels were rarely struck with distinct detailing. Often, it can be noted that the steps of Monticello are incomplete, so nickels with “full steps” are the most interesting to the average collector.

Look at the reverse of the coin. Jefferson nickels have printed P, D or S on top of the Monticello dome. What’s special about these mint marks was that nickels minted from 1938 to 1964 had the P, D or S marks on the right side of the Monticello. The P, D and S stand for Philadelphia, Denver and San Francisco, where the nickels were minted.

The steps on the Monticello Dome should be clearly visible, as they are more collectible and valuable than those nickels minted without regard to the steps of the dome.

Because this was the last issuance of nickels from the San Francisco Mint before a ten-year suspension in coining in that facility, the 1954 S rolls were widely hoarded. Mint State pieces are fairly common as a result, and many have been certified as gems, based on just the luster and surfaces. However, because of the overuse of dies, this issue rarely exhibits a full strike. It has been generally thought of as the most difficult coin in the Jefferson series to find a 5FS or 6FS.

In Denver and Philadelphia, the quality of strikes was so low and quantity so high that there are still nickels found in circulation from these mints. And although the typical nickels from this category do have adequate luster, minting with weak strikes lead to the dual effect of showing incomplete centers incomplete and exposed planchet marks the dies failed to smooth out.

Want to know more about the 1954 Nickel as well as other collectible US Nickels? Be sure to check out our Ultimate Guide to Collectible Nickels.

The 1954 Jefferson Five Cents had 233,300 proofs struck at the Philadelphia mint. The demand for proofs of the nickel had increased significantly, so as a result, there was an almost 100% increase in the number of proof sets ordered over 1953’s orders.

Almost all of the 1954 nickel proofs are fully brilliant, and, as a result, gems of are common. 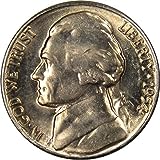 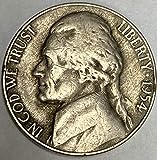 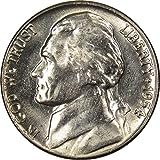 Roughly, this coins value, in average condition, can be estimated to be valued at about $10, while a 1954 Jefferson Nickel in certified mint state (MS+) condition might auction for as much as $180*.

* This estimated value does not reference any standard coin grading scale. So, when we state ‘average’, this is meant to mean ‘in a similar condition to other coins issued in 1954’, and ‘mint state’ meaning the coin has been certified MS+ by one of the top coin grading companies.