Is dumpster diving illegal in Pennsylvania? If you enjoy scavenging through the trash to find a good treasure, you’re not alone. There are many people who share the same passion. While this might be an exciting way of finding a bargain or maybe an excellent way to recreate trash into an art form, there are some things you should know before diving in. 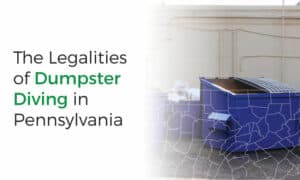 If dumpster diving is a regular habit for you, then you’re probably familiar with the California vs. Greenwood case from 1988. From that case came the law permitting dumpster diving to be legal across the states. Now, while this may be true that doesn’t mean it’s legal in all the cities of those states.

So, now you might ask, is dumpster diving illegal in Pennsylvania. Knowing about the case of California vs Greenwood, you know that it isn’t illegal in the state, however, we’ve researched the five biggest cities in Pennsylvania and you will want to read this before diving in. 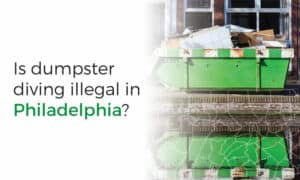 While doing the research we were unable to find a law that pertained to dumpster diving in Philadelphia. We did, however, contact Joel Spivak of the Philadelphia Dumpster Divers Group. According to Joel, there are no known laws of diving being illegal in Philadelphia. He did say that he had heard stories of people getting into trouble for other things such as trespassing and littering.

Trespassing is illegal in Philadelphia, so if you disobey a “no trespassing” sign, if you hop a fence, or if you linger on a property after you were told to leave, you could be facing some heavy fines. Criminal trespass charges can land you time in jail and heavy fines up to more than $4000 depending on the case.

Littering in Philadelphia is also illegal, and if caught, you could expect to see fines up to $900. You should be careful because there are cameras in many areas throughout the city to capture litterbugs. Common courtesy should be to automatically clean up after yourself. Check the area one last time before you leave to be sure you haven’t left any litter on the ground around or near the dumpster or trash pile. 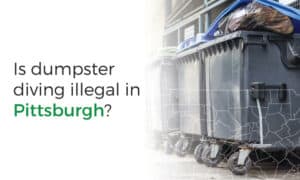 We couldn’t find any laws against dumpster diving in Pittsburgh; however, you must always keep in mind that there are other laws you should abide to keep yourself out of trouble.

Did you know that there doesn’t have to be a sign posted “no trespassing” for it to be illegal? It is considered trespassing the minute you step foot onto another’s property. It’s also illegal to hop a fence or chain and if you disobey a person’s request asking you to leave the property, you will then be asking for more trouble. According to the PA code 18-3503, there are several classifications of trespassing and each one comes with it’s own fine and penalty.

Littering is also illegal and as of June 28, 2018, the amended Bill 431, now known as Act 62, shows where the penalties for littering have increased. Depending on the offense, you could be sentenced to picking up illegally dropped and dumped trash along the roadways for up to 100 hours for one year. That isn’t all though because you will also be faced with large fines up to $1000,00. 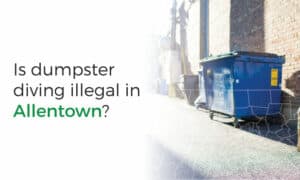 If you’re planning to dive in Allentown, you might want to reconsider because it is illegal to dumpster dive in the city. Part 1137.04A of the Public Health Code states that it shall be a violation of this ordinance for any person(s), unauthorized by the city, to collect or pick up or cause to be collected or picked up any recyclable material placed at curbside for city collection. If you’re caught scavenging through the trash you will be faced with a penalty of $25.00 or $100.00 depending on the severity of the crime.

Trespassing in Allentown is also illegal, and you must keep that in mind as well. If you’re caught trespassing on the prohibited property, you will be slapped with fines up to $300.00 and/or 90-days in jail.

Littering in Allentown can cost you some large penalties as well. In reference to trespassing article 733 section 720.99,

it’s clear that you could expect to pay fines up to $500.00 if you’re caught littering. If you choose to violate your ticket penalties, you could rack up fines of thousands of dollars. So, for your own sake, it’s best to stay away from Allentown if you plan to dumpster dive. 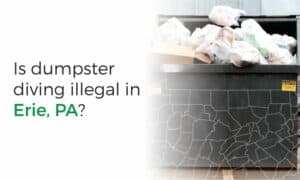 In doing the research we were unable to find anything stating that you can’t dumpster dive in Erie, however, that doesn’t mean you won’t get in trouble for trespassing and littering.

Don’t assume that if there’s no sign it’s ok to dive in. It’s considered trespassing when you open a gate, jump a fence, walk onto private property, or cut a lock. Depending on the level of your defense you could be charged with as little as $300.00 up to $25,000 and/or jail time.

If you’re diving in Erie, make sure you clean up behind yourself, because if you get caught littering, you will have to pay a $25.00 fine. If you get a fine, be sure you pay it, or your penalties could pile into the thousands and you could land in jail.

The City of Erie 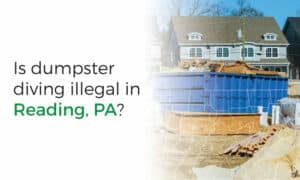 We were not able to find a code forbidding scavenging; however, we did find a page that discusses the prevention of scavenging and a link to a form for reporting illegal scavenging. We’re certain you can be safe in assuming it’s illegal to dumpster dive in Reading, PA.

It’s also illegal to trespass onto private property, so even if you find there is no sign posted, you should think twice before entering on to private territory. The trespassing fines are heavy in Pennsylvania and if you’re not careful you could rack up fines into the thousands and you could face time behind bars.

You don’t want to be caught littering in Reading either or you will be slapped with heavy fines and possibly jail time for that too. According to violation code QOL.005,  No person shall throw, dump, place, sweep or dispose of any waste, trash, garbage or rubbish upon any public sidewalk, alley, street, bridge, public passageway, public parking area or on any public property.

Now that you’re aware of these laws you should have a better understanding of your initial question, is dumpster diving illegal in Pennsylvania. Remember, if it’s illegal in your jurisdiction, don’t risk the large fines, move on to someplace else.

Also, keep in mind that if someone asks you to leave, just leave. There is no reason to argue and cause more trouble for yourself. If you see something sitting out that you can’t live without, consider asking the owner if you can have it. Chances are they will allow you to take it.

Don’t turn your hobby into a nightmare; use common sense and courtesy while dumpster diving and always wear appropriate clothing. Follow the rules and you should not have any negative results.