The Legalities of Dumpster Diving in Michigan

People have asked, is dumpster diving illegal in Michigan? Dumpster diving or scavenging, no matter what you call it, it has become a popular event among many, but it does have risks when you’re not careful.

We’ve done the research and we know that in 1988 the Supreme Court ruling of California vs. Greenwood made it legal across the states to dumpster dive, but there are stipulations to the law. 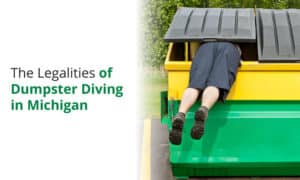 Cities and municipalities have the right to put into place their own laws in regard to dumpster diving, so it’s not only important to be safe while doing it, but you must also be familiar with the area you plan to dive and know the laws.

Although the state of Michigan has deemed that garbage placed at the curb becomes property of the public making dumpster diving legal, many cities disagree with the state and they have put their own laws into place.

Before diving into the trash on the streets throughout the state, let’s look at what the law says about dumpster diving in the five biggest cities in Michigan.

Dumpster Diving Laws in the City of Detroit 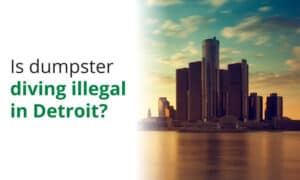 According to section 22-3-1 of the Detroit city code of ordinances, it is illegal for anyone to collect, disturb, or transport waste from the streets, alleys, or public places of the city without a license. If you’re caught in a dumpster or transporting waste without a license you can be slapped with up to $500 in fines and even jail time.

To avoid getting yourself in trouble you can obtain a license from the Detroit police department, but you must be aware that your vehicle will also need to be inspected before a license is issued. You will need a covered truck bed or an enclosed vehicle to pass inspection. A tarp or other water tight containers will be permitted but you will need to show them upon your inspection.

When applying for a license you will need to know the make and model of the vehicle you will be using as well as the tag number. You will also need to state the intention of your collections, where you plan to do your scavenging, and you must possess a valid Michigan drivers license.

We were unable to determine the fee for the license, but we do know that it is an annual license and it expires on August 1st of each year.

Dumpster Diving Laws in the City of Grand Rapids, Michigan 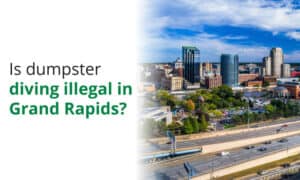 In doing our research we couldn’t find a law that was against dumpster diving in the city of Grand Rapids. You should use caution though before diving in and remember that there are other laws that can be broken if you’re not careful.

There are laws against trespassing, disorderly conduct, and littering. Stay out of areas where no trespassing signs are posted and do not cross over fences, do not open gates, and never break locks. There is nothing that’s so important that you need to risk time behind bars.

Always clean up after yourself and if you are asked to vacate the premises then kindly oblige. Keep the noise down so that you don’t face disturbance charges and don’t start a fight with someone who asks you to leave.

The best thing you can do before diving in is to get permission from the business or homeowner. It’s a good idea to contact the proper authorities to be sure that dumpster diving is permitted in the area where you want to scavenge.

Dumpster Diving in the City of Warren 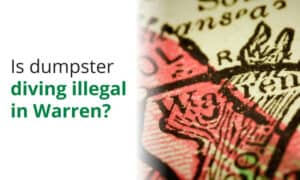 A junk peddlers license can be purchased for $35.00 for the first vehicle and $25.00 for each additional vehicle or trailer. If you are planning to dive for profit you will also need to purchase a secondhand goods license for $35.00. Both permits are good for one year and they expire on March 31st.

Be sure to adhere to all trespassing, disorderly conduct, and littering laws to avoid the risk of having your license revoked.

Dumpster Diving in the City of Sterling Heights 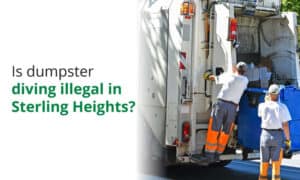 While researching the laws in Sterling Heights we were unable to find an ordinance code, however, we did find out that you do need to have a license to scavenge for trash in the city.

You will need to obtain a business license which will require a one-time fee of $50.00 and in addition to that you might also need to apply for a separate registration as a peddler or refuse collector.

Before diving in you should contact the city clerk’s office for information regarding the registration and licensing procedure.

Dumpster Diving in the City of Ann Arbor 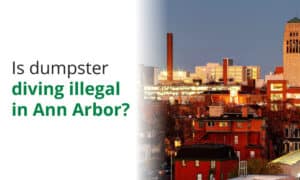 In Ann Arbor the municipal code of ordinance 2:8, titled Scavenging and Unauthorized Storage, states that no person shall collect or remove solid waste or recyclables that have been put out for city collection.

We have found no evidence indicating that dumpster diving is permitted with a license, however, you should contact the city clerk’s office to be sure there is no permit in place for this action, especially if your intent is to resell your finds.

If you find there is no special permit for dumpster diving in Ann Arbor, don’t risk fines and/or jail time knowing it’s illegal in the city.

In conclusion, we hope that we answered your question, is dumpster diving illegal in Michigan? As we mentioned, it is legal in the state, however, you can see that four out of the five biggest states we’ve chosen either require you to obtain a license or it isn’t permitted at all.

Since laws do change periodically, it would be advised that you contact the numbers we’ve provided to be sure nothing has changed. It’s always best to double check than to wind up in trouble. It’s also smart to know the area you will be diving in since some jurisdictions can be different on one side of the road from the other.

As always, safety should remain a priority. Adopt these habits when diving into the dumpsters: