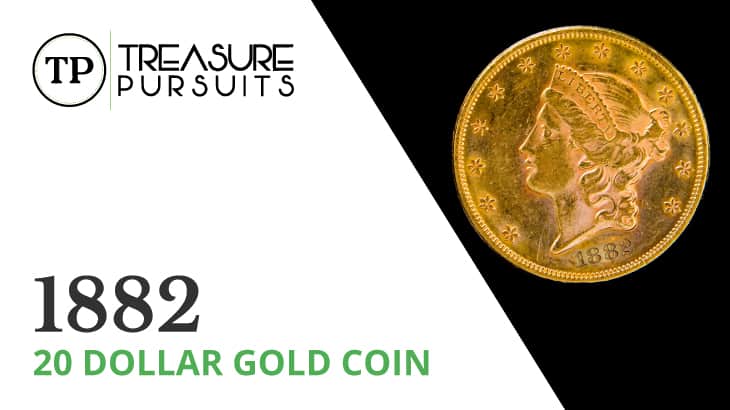 The Liberty Head double eagle, also known as the Coronet double eagle, is a twenty-dollar gold coin that enjoyed over fifty years of mintage and is popular today among collectors.

In the wake of the California Gold Rush, the creation of a new larger gold coin was commissioned, and Head Engraver James B. Longacre, whose designs can be found on numerous coins from the mid-to-late nineteenth century, would be in charge of the design.

The obverse is occupied by a classical-style profile portrait of Liberty with the year of mintage at the base and a ring of stars adorning the rim.

The reverse design evolved throughout the series, producing three types. Type I, minted from 1850 to 1866, features an elaborately-decorated eagle with wings spread. Above the eagle’s head is a ring of stars, and the legend “UNITED STATES OF AMERICA” covers the upper rim. The denomination is along the bottom, written as “TWENTY D.”

Type II reverses, used from 1866 to 1876, are the same as Type I except that the shield on the eagle is of a rounder shape, and the motto “IN GOD WE TRUST” appears above the eagle.

Type III was used from 1877 to 1907 and changed the denomination from the abbreviated “TWENTY D.” to the longform “TWENTY DOLLARS.”

In 1907 the Liberty Head double eagle was replaced by the Saint-Gaudens double eagle, which many consider to have a superior design.

The Liberty Head double eagle contains 90% gold and 10% copper and has a diameter of 34 millimeters and a mass of 33.44 grams.

The 1882 mintage was somewhat low for the series, thanks primarily to the extremely small number of Philadelphia issues.

San Francisco produced the vast majority, with 1,125,000 examples struck. Next was Carson City, which minted 39,140. For reasons not entirely known, Philadelphia only struck 571.

The 1882 issue, especially the Philadelphia issue, is therefore one of the rarest Liberty Head coins, second only to the 1861 Paquet Reverse specimen.

There is a great lack of high-grade Mint State specimens, the highest graded examples reported by NGC being MS-63. The majority grade as Extremely Fine.

Due to scarcity and age, the 1882 Liberty Head double eagle is very valuable and commands high premiums in all grades. There is a bit of variance, however, among the different mint varieties.

The minimum value for one of these coins would be its melt value, or how much the gold is worth to a precious metals dealer. The current melt value is approximately $1,173. However, it would be very unwise to sell this coin purely for its gold, as its numismatic value is almost certain to be higher.

Due to its scarcity, the Philadelphia issue is by far the most valuable, starting out with a nice $18,327 for Very Fine grade examples. The value increases steeply to $38,860 in Extremely Fine-40 and $71,958 in About Uncirculated-50.

With a coin as valuable as this, it is always a good idea to have your specimen evaluated by a coin-grading service like NGC or PCGS if you intend to sell it. It may cost a bit of money and time up front, but it can help you get the most value out of your coin.