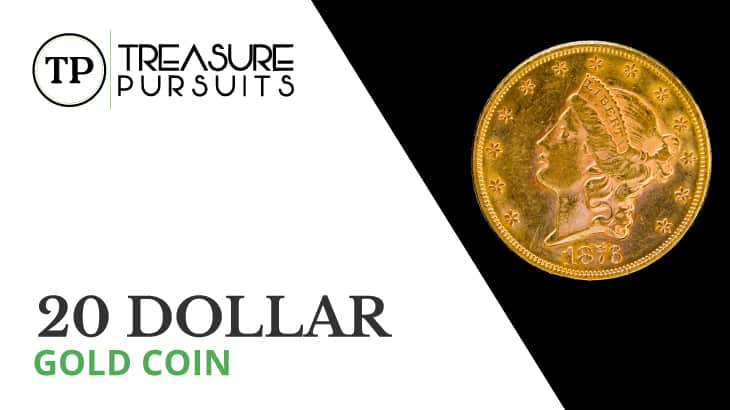 The double eagle is a discontinued twenty-dollar gold coin that houses some of the most valuable issues in American numismatics.

History of the Double Eagle

The double eagle was created in 1849, one year after the discovery of gold in the American West jumpstarted what would later become known as the California Gold Rush.

With unprecedented amounts of gold pouring into the marketplace, the double eagle, the largest US coin denomination ever created, was conceived as a more convenient way for investors to deposit gold bullion.

James B. Longacre, whose designs you can see on the Indian Head penny, created the design for the first double eagle, called the Liberty Head double eagle.

The obverse face, as the name suggests, features a Greco-Roman portrait of Lady Liberty with the year of mintage below her neck and a ring of stars around the rim.

The reverse design is centered around a heraldic eagle decorated ornately with a shield and a host of baroque filigrees. Along the upper rim is the legend “UNITED STATES OF AMERICA,” and above the eagle’s head is a sort of sun ray device with a ring of stars.

The denomination, written as “TWENTY D.” on early mintages and “TWENTY DOLLARS” on later ones, is at the bottom of the reverse.

Longacre’s double eagle entered circulation in 1850 and was struck variously in Philadelphia, Denver, Carson City, New Orleans, and San Francisco until 1907, when Theodore Roosevelt’s initiative to beautify American coinage called for a new design for the denomination.

It was acclaimed sculptor Augustus Saint-Gaudens who was appointed to the task. The Saint-Gaudens double eagle is revered by many as the most beautiful American coin ever created.

The obverse of Saint-Gaudens’ double eagle depicts a full-body Liberty standing, bearing a torch in one hand and an olive branch in the other, illuminated from behind with rays of light. A ring of stars still adorns the rim, as does the legend “LIBERTY,” and the year of mintage is found in the lower right field.

The reverse features an eagle in flight above a similar sun ray device. The motto “IN GOD WE TRUST” sits atop the sun, and above the eagle are the legend “UNITED STATES OF AMERICA” and the denomination “TWENTY DOLLARS.”

Saint-Gaudens’ double eagle was struck from 1907 to 1933 with various minor design changes throughout its twenty-six-year mintage.

In 1933, Congress passed a law demonetizing gold and making the ownership of gold coins and bullion illegal in an effort to combat the effects that gold speculation was having on the value of the dollar.

The final double eagle produced was the 2009 Ultra High Relief double eagle, which used digital mapping technology to create a visually stunning recreation of Saint-Gaudens’ beloved coin and endowing it with a strike quality that would have been impossible to achieve during the sculptor’s lifetime.

Double eagles are among the most valuable US coins, both numismatically and in terms of melt value. The inherent gold value of a double eagle coin alone is fairly high. Double eagles were required by law to contain 0.9675 ounces of gold.

At the time of the writing of this article, the melt value of a double eagle is about $1,176. You can click on that number for an updated price as the value fluctuates. This is the minimum value you are likely to pay for a specimen, regardless of issue or variety.

Saint-Gaudens double eagles in About Uncirculated and below can usually be had for under $2,000, though this is not always the case.

Average-grade Liberty Head double eagles will usually be more in the range of $3,000 to $6,000. Mint State examples of Saint-Gaudens, with the exception of certain years, can be had for under $7,000, but Longacre specimens tend to be more expensive in this grade range. Many issues can reach hundreds of thousands of dollars above MS-60.

Carson City issues tend to be more valuable as they are more sought by collectors, and the most valuable issue is likely the Paquet Reverse of 1861.

Many people view double eagles as an investment, a physical stake in the gold market, similar to how some use the American Silver Eagle. This is certainly a valid use for the double eagle, but the real worth of these coins lies in their numismatic value.

It is incredible to possess such a substantial piece of gold, especially one with so much history attached to it, and collecting the double eagle can be a very rewarding experience for the collector and a great token to pass down to younger generations.

However, as demonstrated by the previous section, double eagles of any variety or issue are expensive, and anyone wishing to start a collection of this coin is going to have to spend quite a bit.

However, there are a few ways to minimize the cost of collecting the double eagle. The first is obviously to be content with lower grades. The intrinsic gold value is not affected by the condition, so the grade is only important for those wanting to have a truly impeccable set of these coins.

The second tip is to stick to later issues if your intent is to use the coin as gold bullion. Saint-Gaudens double eagles, especially later issues, and the 2009 issue are typically the least expensive, as they have not aged as much.

The third tip is to avoid rarities and highly-sought after varieties like the Paquet 1861 and 1861-S and the Carson city mintages in general, if your aim is to save money. These command high premiums.

To start a collection, stick to high-mintage years with plentiful surviving examples, as these will be easier to find at a reasonable price.

The final tip is to spend a lot of time researching the series before you buy. Find which issues are within your price range, and narrow your search to these years. Know what a reasonable price for a certain coin is, and put thought into which coins you are interested in before buying.

There are plenty of places on the internet to find out this information and to read more tips about investing in double eagles. Here are a few links to get you started:

We hope this article has been a helpful introduction to the double eagle coin. Good luck collecting, and be sure to check out our other content for more information about numismatics!