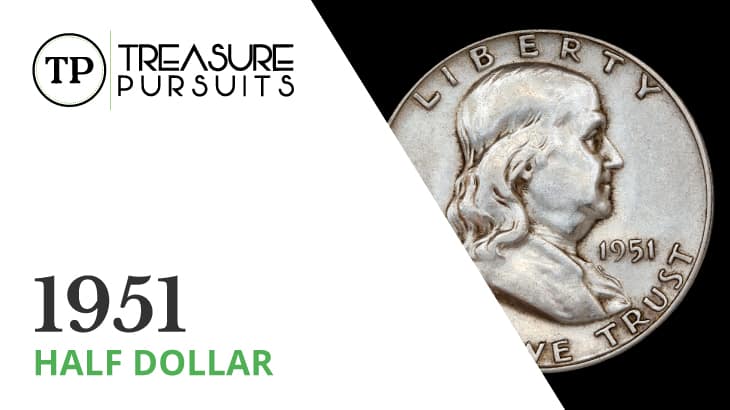 Often overshadowed by its successor, the Kennedy half dollar, the Franklin half dollar is an attractive and accessible series that is relatively easy to own as a complete set.

Mint Director Nellie Tayloe Ross, a long-time admirer of Benjamin Franklin, first had the idea for a half dollar based on the founding father. She asked engraver John Sinnock, whose work had recently appeared on the Roosevelt dime, to design the new coin.

Sinnock’s obverse design is typical for coins of this era: it features a profile bust portrait of Franklin with the year of mintage to the right. “LIBERTY” appears at the top of the rim, and the motto “IN GOD WE TRUST” runs along the bottom.

The reverse is also fairly typical. Its central image is the beloved icon of independence, the Liberty bell. The legends “UNITED STATES OF AMERICA” and “HALF DOLLAR” appear on the upper and lower rims, respectively.

To the left of the bell is the motto “E PLURIBUS UNUM,” and to the right is a small eagle that almost seems like an afterthought. Indeed, this eagle was not part of Sinnock’s original design; it was added to appease legislation that required an image of an eagle to appear on all half dollar pieces.

The Franklin half dollar was first struck in 1948, and it had only been minted for 16 years when the assassination of President John F. Kennedy in 1963 prompted the creation of the Kennedy half dollar, which began production the following year.

Like all half dollars, the Franklin half dollar contains a composition of 90% silver and 10% copper. The coin has a diameter of 30.6 millimeters and a mass of 12.5 grams.

History of the 1951 Franklin Half Dollar

The 1951 issue was the fourth year of the Franklin half dollar and saw a fairly sizable mintage of just over 40 million coins.

Philadelphia, San Francisco, and Denver all struck half dollars in 1951. Philadelphia struck the most, with 16,802,102 examples produced.

1951 half dollars are overall still quite common today thanks to a nice mintage, and they are readily available to collectors interested in the series.

There are a few notable varieties for this issue. The first is an S/S repunched mint mark, meaning that the San Francisco mint mark has been struck over a pre-existing “S” mint mark, producing a doubled effect.

Perhaps the most interesting variety is the “Bugs Bunny” variety, which comes from the Philadelphia issue. Caused by a clash between the obverse and reverse dies, some say the resulting mark on Franklin’s mouth resembles buck teeth.

These varieties do not typically command higher premiums, but they can be interesting to examine and collect.

A cousin to the Full Bands of the Jefferson nickel and Mercury dime, the Full Bell Lines designation is a way of recognizing Franklin half dollars with exceptional strike quality.

A Franklin half dollar qualifies as having Full Bell Lines if the sets of lines near the opening of the bell on the reverse are fully struck and complete all the way across the bell.

These fine lines are incomplete or shallowly struck on the majority of Franklin half dollars, so a Full Bell Lines specimen is desired by collectors who are seeking well-struck examples that get the most out of Sinnock’s design.

The 1953-S and the 1963 Franklin half dollar issues are the rarest to find in Full Bell Lines, and such examples bring very high values. The 1951 issue is not as scarce in Full Bell Lines, but this designation can still raise the value a nice premium over an average specimen.

Valuing the 1951 Franklin Half Dollar

The minimum value for the Franklin half dollar is its melt value, the intrinsic value of the silver content. The current melt value of this coin is approximately $5.34. This is subject to change, so you can click the price to see an updated value.

The MS-67 Philadelphia mintage provides a good example of the difference Full Bell Lines can make. Worth $3,250 regularly, the value jumps to $18,250 with Full Bell Lines.