Is Dumpster Diving Illegal in Florida?

It is called “urban foraging”, “containering”, “bin-diving”, “d-mart”, “dumpstering”, “skip dipping”, and garbage gleaning to name a few. Call it what you will, it is dumpster diving and the new craze. Historically labelled “garbage picking”, dumpster diving was once relegated to the homeless and destitute. But as the media and internet often achieve, dumpster diving has been promoted to an obsession of the affluent.

What is Dumpster Diving?

Dumpster diving is salvaging the discarded items out of commercial and construction dumpsters or residential refuse containers to salvage items for resale. Dumpster diving has taken on a life of its own, promising adventure to the seeker. Some divers are on a search for profit, while others are on a quest to supplant commercial waste. Whatever the motivation, we have sourced information that may be helpful to you in the dumpster diving circuit in Florida.

The dumpster diving “industry” found its legality through a 1988 United States Supreme Court (SCOTUS) case entitled, California vs. Greenwood. Although the case does not specifically address dumpster diving, it does focus on the definition of trash or refuse that is left on public property. In the SCOTUS ruling, the Court found that when an item is thrown out as garbage it becomes the “public domain”. 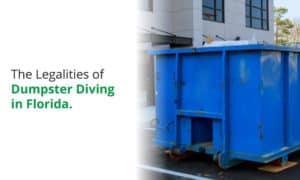 Each state has the right to issue laws to govern its residents, so long as the state code does not violate the federal law or SCOTUS case because those will take precedence. Florida is no exception. So, to determine the dumpster diving laws in Florida we reviewed what the Florida law has said about public property. The Florida Supreme Court has ruled that when a business caters to the public its business is defined as being public property.

The Florida State Attorney General clarified the State’s law on dumpster diving. Specifically, “the act of dumpster diving in Florida is not illegal”. There are laws against trespass, littering, vandalism, and disorderly conduct that can bring criminal penalties during the process of dumpster diving. For example, there is an appellate case out of Tallahassee, Florida (Chambers v. State) where criminal charges for trespass and theft were secondary to dumpster diving activities.

Concerning the criminal charge for trespass on public property, Florida requires that a person must be placed on notice not to trespass either orally or by posting a “no trespass” sign. This is called “trespass after warning. Therefore, unless you are told specifically to leave or there exists a “no trespass” signage dumpster diving is authorized.

The first question is answered. Is dumpster diving illegal in Florida? It is not illegal to dumpster dive in the State of Florida.

We looked at four regional metropolitan cities of Florida to determine whether there were any laws prohibiting dumpster diving. Here is what we uncovered about dumpster diving in Jacksonville, Miami, Tampa Bay, and Orlando. 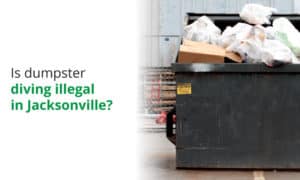 1. Is it illegal to dumpster dive in Jacksonville?

We reviewed the Ordinance Code City of Jacksonville, Florida (November 13, 2018) and could find no specific city law banning dumpster diving. The general rules about trespass and disorderly conduct are still in play. A call to the police department also confirmed no specific law against dumpster diving. 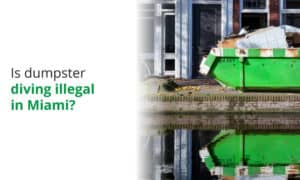 2. Is it illegal to dumpster dive in Miami?

We reviewed the Code of Ordinances for Miami (October 30, 2018) and could find no specific city law banning dumpster diving. The general rules about trespass and disorderly conduct are still in play. A call to the police department also confirmed no specific law against dumpster diving. 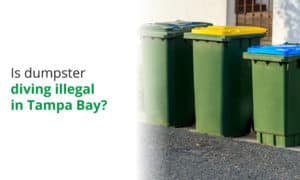 3. Is it illegal to dumpster dive in Tampa Bay?

We reviewed the Code of Ordinances City of Tampa, Florida (November 1, 2018) and could find no specific city law banning dumpster diving. The general rules about trespass and disorderly conduct are still in play. A call to the police department also confirmed no specific law against dumpster diving. 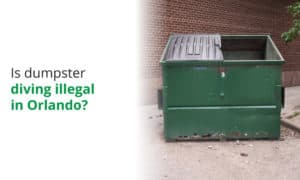 4. Is it illegal to dumpster dive in Orlando?

We reviewed the Code of the City of Orlando, Florida (October 8, 2018) and could find no specific city law banning dumpster diving. The general rules about trespass and disorderly conduct are still in play. A call to the police department also confirmed no specific law against dumpster diving.

You can be charged for trespass for a number of reasons. A dumpster on private residential property is off-limits if not at the street corner for refuse pick-up. Entering a dumpster on restricted property, such as on city property, would be considered a trespass. Additionally, the State of Florida states that a dumpster against the side of a building or specifically marked with a “No Trespass” signage would be considered off limits to dumpster diving.

There is a general rule when dumpster diving that you leave the surrounding area in at least the same condition as you found it. This is the case for three reasons. First, discarding the dumpster contents would be subject to criminal penalties for vandalism and littering. Second, adverse press to diving gives the process a bad image and reputation. Third, the adverse condition would result in the dumpster being locked by the owner, removing that dumpster from future access to divers.

To disobey a city ordinance, the direction from premise owner, or a civil authority to vacate an area could result in a criminal charge of disorderly conduct. Therefore, all dumpster divers adhere to the provision, when on site, to follow all requests and directions.

The removal of any personal data or information found inside a dumpster could result in a charge of identity theft. Accordingly, all personal information that is uncovered inside the dumpster should be destroyed or left alone inside the container.

Florida supports the legality of dumpster diving. The State’s endorsement of this hobby will remain subject to each municipality’s codes and ordinances. If in doubt, be sure to contact the city code which can typically be reviewed online for each community. Maintaining a good public impression on the hobby is paramount to the future success of dumpster diving for its proponents. So, with this in mind, be sure to adhere to Florida’s “trespass after warning” law, the individual municipal codes, and the common sense rules laid out by supporters.