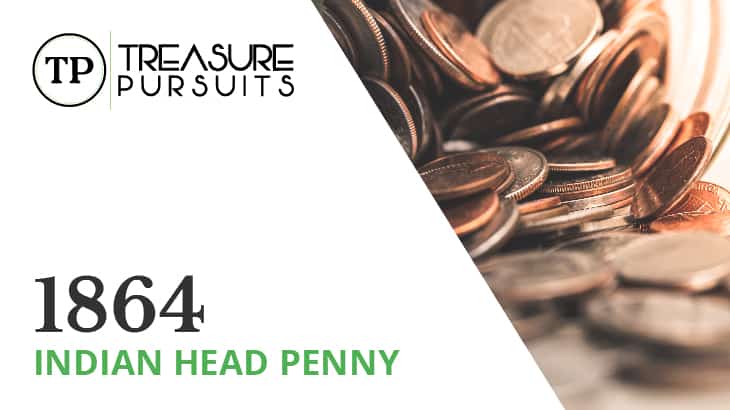 Minted largely in the second half of the 19th century, the Indian Head penny served as the cent piece for some of the most legendary figures in American history and is highly regarded by today’s numismatists.

Head Engraver James B. Longacre was responsible for the design of the Indian Head penny. His obverse depicts Liberty in a Native American-style headdress, surrounded by the legend “UNITED STATES OF AMERICA” running along the rim and the year of mintage at the bottom.

The reverse face originally held a laurel wreath encircling the denomination “ONE CENT.” After the first year of production, however, this was changed to an oak wreath, and a shield was added at the top, and a bundle of arrows was added at the bottom.

In terms of composition, there are two types of Indian Head cents. The first type included coins struck from 1859 to 1864 and was made of 88% copper and 12% nickel with a mass of 4.67 grams, exactly the same as the Flying Eagle cent.By contrast, all subsequent issues are composed of 95% copper and 5% tin and zinc and have a mass of 3.11 grams.

The final year of mintage for the Indian Head penny was 1909, the bicentennial of Abraham Lincoln’s birth and the first year for the Wheat penny.

History of the 1864 Indian Head Penny

Up until this time, Indian Head cents had used a copper-nickel alloy. Due to the high value of nickel at the time, these had begun to be hoarded in mass quantities, to the extent that merchants were forced to use copper tokens as change.

These tokens were less expensive to make and had a lower intrinsic value than the copper-nickel cent pieces, and they had become widely circulated.

In order to cut costs of production and reduce hoarding, the Mint decided to model the new Indian Head cents after the tokens and thus converted the composition to a bronze composite in 1864.

Of those pieces struck in the bronze composite, two design varieties exist. At some point during the year, a small “L” was added to the ribbon that sits just below the lowest feather on the obverse portrait.

All cents were struck at Philadelphia at this time, so there are no mint marks on this issue. As a whole, the coins show evidence of weak strikes and overused dies, and Mint State examples can be quite scarce.

In addition to grade, the value of an 1864 Indian Head penny largely depends on its variety, i.e. which composition it uses and whether it contains the “L” initial.

If your coin has the “L” on the headdress ribbon, it is sure to be a bronze-type coin. However, if it does not have the “L,” the easiest way to tell if it is bronze or copper-nickel is to weigh it.

Copper-nickel coins will have a mass of around 4.67 grams, while bronze coins will come out around 3.11 grams.