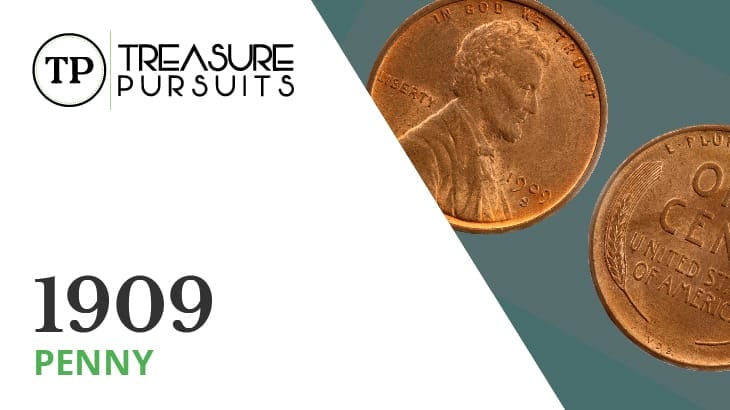 Almost 110 years since its first mintage, the wheat penny remains a staple of coin collections and a favorite among beginning collectors.

The coin was designed by Lithuanian medalist Victor David Brenner, whose simple obverse face design has remained largely unchanged throughout the various iterations of the Lincoln cent.

The obverse features the iconic profile bust portrait of Abraham Lincoln, with the word “Liberty” on his left and the year of mintage to his right. Above his head is the motto “IN GOD WE TRUST.”

On the reverse, the denomination “ONE CENT” is large and top-center, with “UNITED STATES OF AMERICA” just below it. These are surrounded by two stalks of wheat. Near the top rim is the motto “E PLURIBUS UNUM.”

History of the 1909 Wheat Penny

1909 was the centennial of Abraham Lincoln’s birth. President Theodore Roosevelt, in order to commemorate Lincoln, who was a personal idol of his, commissioned the creation of a cent piece with Lincoln’s portrait.

This was the first time that a real person had appeared on U.S. coinage (outside of the commemorative Columbian half dollar, which featured Christopher Columbus). Prior to the wheat penny, only animals and fictitious figures like the Native American on the Buffalo nickel and Liberty on the Morgan silver dollar had been seen on U.S. coins.

As part of the original reverse design, Victor David Brenner included his initials near the lower rim, below the wheat.

Many felt this was too bold of a design choice and wanted to remove the initials entirely. By August of 1909, new designs with no initials were already being minted. These varieties will be discussed further in the next section.

Thanks to the controversy with the designer’s initials and a minting error on San Francisco coins, there are five main varieties of the 1909 wheat penny.

The fifth variety, which is likely the least common variety of 1909 wheat penny, is the result of a minting error. Minted in San Francisco, the “S” has been struck twice, and the original “S” can be seen through the second.

The value of the 1909 wheat penny is dependent not only on the grade but also the mint mark and variety. San Francisco mintages generally bring much higher values, as do the varieties with initials.

The value of San Francisco coins is quite a bit higher. For the mintage without initials, Good and Very Good grades bring a value of $100-110. This increases to $153 in Very fine, $231 in About Uncirculated, and $335 in Uncirculated (MS-60).

The variety with the double “S” strike mistake is worth around $5-10 dollars higher at each grade than the San Francisco mintage without initials.

The San Francisco mintage with initials is the most valuable by far. Good grade coins are worth $765, and Very Good grades are worth $849. The value increases dramatically to $1,024 in Extremely Fine.