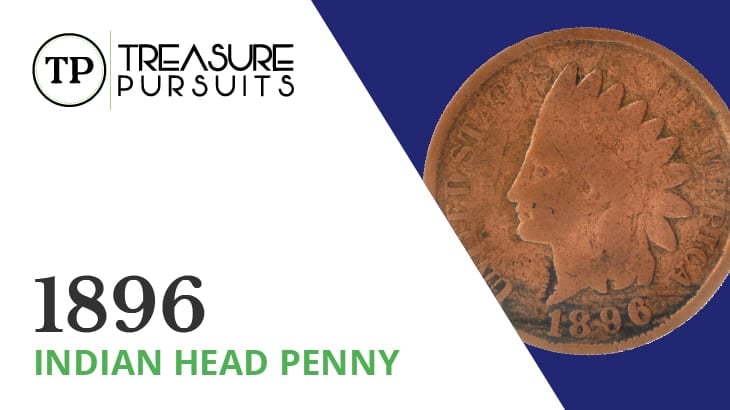 As the first long-running small cent, the Indian Head penny paved the way for the cent pieces we know and use every day.

First minted in 1859, the Indian Head penny was an attempted correction to the failed Flying Eagle cent that had been in use for the last three years. James B. Longacre, the designer of both coins, created a design that both fixed the strike issues of the previous cent and forged a long-lasting numismatic legacy.

The obverse features a profile bust portrait that is not actually an “Indian Head” but  rather Lady Liberty wearing a Native American feather headdress. She is flanked on either side by the legend “UNITED STATES OF AMERICA,” and below her is the year of mintage.

The reverse design had two iterations. The first was a one-year-only type used in 1859 and had a laurel wreath surrounding the denomination “ONE CENT.” In 1860 the wreath changed to oak, and a shield and a bundle of arrows was added.

The composition also had two versions. The first type was a copper-nickel composition that consisted of 88% copper and 12% nickel and was used from 1859 to 1864. These coins had a mass of 4.67 grams.

As the value of nickel was high at the time, this first type was being hoarded en masse, so in 1864 the Mint introduced a bronze composite composition of 95% copper and 5% tin and zinc with a mass of 3.11 grams.

The bronze composition was used until the coin was terminated in 1909 to make way for Victor David Brenner’s ever-popular Wheat penny, the first Lincoln cent.

History of the 1896 Indian Head Penny

Much like the previous year’s issue, the 1896 Indian Head penny received a healthy mintage in the wake of the economic recession brought on by the Panic of 1893.

A total of 39,055,431 cent pieces were struck this year. They were produced exclusively at Philadelphia, as is the case for any pre-1907 Indian Head penny, so you will not find a mint mark on this coin.

Thanks to its high mintage, this issue remains somewhat common in all but the highest gem grades. Thus, any collector interested in this piece should have little to no trouble getting a hold of a specimen in nice condition.

This also means that the value for this issue is rather low in most cases, and although several varieties are available from this year, none of them are in particularly high demand or command higher values.

One factor that can add value to your 1896 Indian Head penny, however, is its color. This issue is made of the bronze composite, and coins that contain such a high amount of copper tend to tone as they age.

The picture below of a group of Lincoln cents gives a good idea of what the different color stratifications will look like on a given coin, although it is certainly not a substitution for a professional authentication.

Despite its commonality, the 1896 Indian Head penny can be quite valuable in very high grades, especially if it displays a nice reddish tone.

Full Red specimens are hard to find, but they are worth the hunt, as their values see dramatic increases over the other two colors.

If your 1896 Indian Head penny displays either Red-Brown or Full Red color, it may be worth your time to have it authenticated by a coin-grading service like NGC or PCGS, especially if you intend on selling it.