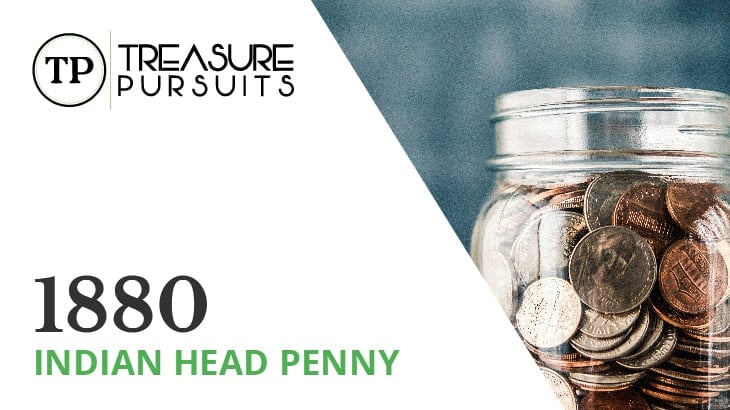 The Indian Head penny is a true numismatist’s coin: it is at once rich in history, influential in coin design, and popular among today’s collectors.

Its story begins in 1859, when it was created as a better-designed and more efficient successor to the Flying Eagle, which had been an unsuccessful prototype of the small cent.

It was the influential figure James B. Longacre who designed the Indian Head penny. The obverse design, supposedly modeled after Longacre’s own daughter, features a profile bust portrait of Miss Liberty wearing an American Indian-style headdress.

The legend “UNITED STATES OF AMERICA” is divided between the left and right portions of the rim, and the year of mintage sits at the base of the coin.

The reverse design began in 1859 as a laurel wreath encircling the denomination “ONE CENT.” It was changed permanently the very next year to an oak wreath with a shield at the top and a bundle of arrows at the bottom.

Both faces make use of a rim of small bumps called denticles, and the edge of the coin is plain.

Like the design, the composition also changed. From 1859 to 1864, a composition of 88% copper and 12% nickel was used. To combat rampant hoarding, the mint switched to a bronze composite of 95% copper and 5% tin and zinc, which was used for the remainder of the series.

Ultimately, the Indian Head cent lasted fifty years before being replaced in 1909 by the Wheat penny, but it left a lasting legacy as a beloved coin and a successful pioneer of the small cent denomination.

History of the 1880 Indian Head Penny

The 1880 issue enjoyed a fairly large mintage of 38,961,000 cents. As is true for the vast majority of this series, all these pieces were struck at the Philadelphia mint. As such, there is no mint mark on these coins.

Luckily for the Indian Head collector, this issue is common in all grades short of Full Red gem, so you should have little trouble obtaining a piece.

As this coin was struck after 1864, it is made of the bronze composite. This means that it contains a large amount of copper, which has a tendency to tone with age.

A copper coin with minimal or no toning may be called Full Red. A somewhat toned coin shows a Red-Brown color, and a fully toned coin is known as Brown. Full Red is the most desirable, and a Full Red Indian Head penny will be worth more to a collector than a Red-Brown or Brown example.

The 1880 issue is also home to one of the more unique varieties among the series, a die-clash error that appears as a group of markings on the reverse. It was likely caused by an abnormally hard strike from the obverse die.

The 1880 issue also has a doubled die variety, which can be a bit difficult to identify in the Indian Head series because of a phenomenon known as Longacre doubling.

Longacre doubling is an effect seen on many Indian Head pennies that usually manifests as a shoulder or lip that appears as a doubled image around design elements, most notably lettering.

It is not considered a variety because it is present on the majority of Indian Head pennies, so it does not bring extra value to a coin. The exact reason for Longacre doubling is not known, but it has something to do with the way the design was created on the master die.

A doubled die, on the other hand, is the result of an error in the hubbing process of an individual die, meaning that only coins struck with that specific die will show doubling. For this reason, doubled die varieties are more rare and valuable.

The main way to differentiate between the two is that Longacre doubling will usually appear on both sides of the lettering, while the doubling on a doubled die is usually off to one side.

The 1880 issue claims higher values than most later mintages, but its commonality still keeps most values in the affordable range.

To illustrate the difference that the color can make, we will examine the MS-65 grade. The value increases from $350 in Brown to $600 in Red-Brown. The same coin in Full Red commands $1,200.

With value increases this high, it is a good idea to get any Red-Brown or Full Red specimens you have authenticated by a grading service like NGC or PCGS.