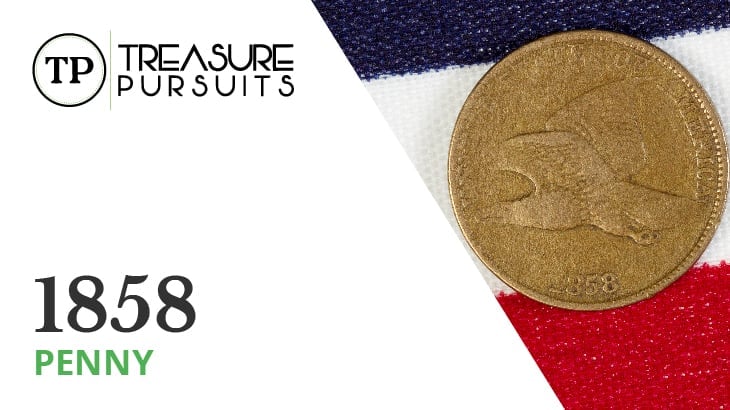 A short-lived but eminently collectible series, the Flying Eagle cent has been popular among numismatists since its inception.

The Flying Eagle was the first attempt at creating a small cent. The previous cent piece, the Braided Hair Liberty Head cent was almost the size of the modern half dollar, but by 1856, these bulky and expensive coins had become unpopular.

The Philadelphia Mint, under the direction of James B. Longacre, sought to replace it with a smaller cent piece, at the same time hoping to eliminate the use of Spanish colonial coins in circulation. Thus, the Flying Eagle cent was born.

Sporting a composition of 88% copper and 12% nickel, the new coin was initially successful, and hundreds of people lined up to exchange their old cents and Spanish silver for the Flying Eagle at its debut in 1856.

Longacre’s obverse design is rather simple; it depicts an eagle in flight with the legend “UNITED STATES OF AMERICA” along the upper rim and the year of mintage at the base.

The similarly sparse reverse has the denomination “ONE CENT” surrounded by a wreath. Both faces have a rim composed of denticles or small bumps.

Because of how the reverse and obverse designs lined up, and because the relief was so high, the Flying Eagle pieces tended to strike poorly, most notably on the eagle’s head and tailfeathers, and did not stack properly.

Due to these problems, the Flying Eagle was soon replaced by the Indian Head penny, which was also designed by Longacre and which began production in 1859.

History of the 1858 Flying Eagle Cent

The 1858 issue of the Flying Eagle, the last of the series, had a mintage of 24,600,000, a moderate number for the time, though lower than most Indian Head mintages would be later.

For reasons unknown, there are two types of Flying Eagles from this year: one known as “Large Letters” and one known as “Small Letters.”

The names refer to the size of the lettering on the obverse legend. The easiest way to tell the difference between the types is by looking at the word “AMERICA.” On Large Letter types, the bottoms of the “A” and “M” will be touching. On Small Letter coins, they will not touch.

Interestingly, the population of Large Letter and Small Letter types appears to be roughly equal, so the availability and values of both are not very different.

Within the Large Letters coins, there is a prominent variety, an overdate error known as the 1858/7 or simply the 8 over 7 variety.

In this case, the 1858 die was created from a pre-existing 1857 die, and the old date is still partially visible. This error can be identified by three main characteristics.

The first is the fragment of the “7” which can sometimes be seen around or behind the date. The second is a die chip that appears just above the date. The third is a break in the tip of the eagle’s background wing.

With the large and small letter types and the overdate error, the 1858 issue contains all the major varieties of the Flying Eagle series. If you have these three coins, the 1856 issue, and the 1857 issue, you own a complete set of the series.

The 1858 Flying Eagle cent is affordable in low-to-mid grades but commands nice values in upper grades. Both lettering size types have similar values, but the overdate error is worth quite a bit more.

Since this issue has such high value overall, it has been the subject of much forgery. It is highly recommended to stick to professionally authenticated coins when purchasing any specimen from this issue, as this is the only reliable way to avoid purchasing a fake.