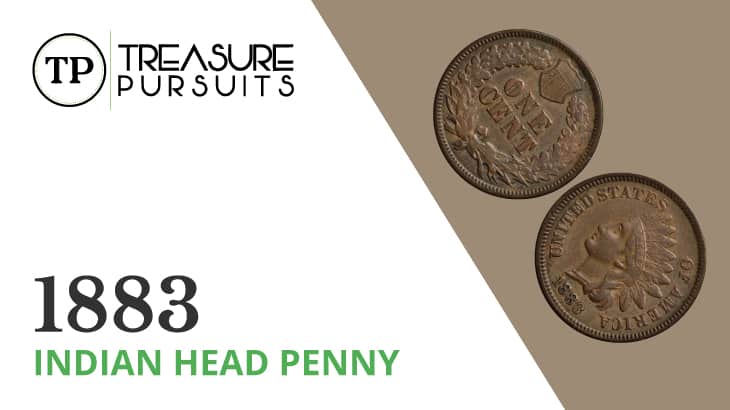 The Indian Head penny, minted through one of the darkest eras in American history, still thrives today in the numismatic community as one of the most popular coins to collect.

First minted in 1859, the Indian Head penny was the second small cent, following on the heels of its predecessor, the Flying Eagle cent; both coins were designed by Head Engraver James B. Longacre.

Despite what the name implies, the obverse actually features a portrait of Lady Liberty in a American Indian-style headdress. It is commonly held that Longacre modeled the portrait after his daughter, though this may be little more than legend.

The rim of the obverse carries the legend “UNITED STATES OF AMERICA,” and the year of mintage sits at the base of the coin.

The reverse has a wreath encircling the denomination “ONE CENT.” Originally, the wreath was made of laurel, but it was changed to oak in 1860, and a shield was added at the top of the wreath and a bundle of arrows at the bottom.

Indian Head pennies continued to be struck until 1908. The following year, the bicentennial of Abraham Lincoln’s birth, they were replaced by the Wheat penny, the first Lincoln cent.

History of the 1883 Indian Head Penny

The 1883 issue enjoyable a fairly sizable mintage for the period. At this time, cent pieces were only struck at Philadelphia, so 1883 specimens display no mint mark. A total of 45,591,500 pennies were struck in 1883.

The 1883 Indian Head cent belongs to Type 3 of the series, meaning that it features the oak wreath and shield design and uses the bronze composite composition of 95% copper and 5% tin and zinc.

There are many die-punching varieties known for this issue, but the most recognized one is the Misplaced Date variety, where the date is struck higher or lower than typical, often blending into the surrounding devices.

The majority of these varieties do not bring extra premiums. What can raise the value of this coin, however, is the color. As with any copper coin, the 1883 Indian Head penny survives in three different colors: Brown (BN), Red-Brown (RB), and Full Red (RD).

Brown is least desirable, and Full Red is most desirable. This issue is relatively common in all grades except Full Red, so if you come across a Full Red example, the value of that coin can be quite a bit higher than usual.

Doubled die varieties are among the most sought-after varieties in coin collecting. To find a doubled die coin, then, can be quite exciting and can raise the value of your coin.

However, what some initially believe to be doubled die Indian Head pennies turn out to have something called Longacre doubling.

Doubled dies are created when a die is being hubbed. If the die jostles or moves while being hubbed, it can create a doubling effect on the design elements, which will be present on all coins struck by that die.

Longacre doubling, so named because it is found almost exclusively on coins designed by James Longacre, is a bit different. It is the result of modifications to the master die that were probably intended to extend the life of the dies or to perfect the design.

Whereas doubled dies can raise the value of a coin, Longacre doubling does not impart extra value to its coin.

One way to identify Longacre doubling is to see if the “shoulder” or “lip” is seen on both sides of the design elements. See the below picture for an example.

The 1883 issue, despite its age, is fairly common in the coin collecting community, so its value is generally modest. That said, uncirculated specimens can bring nice premiums, as can coins displaying Red-Brown or Full Red color.

These values all assume average Brown color. To see the difference color can make, let’s examine the MS-64 grade. In Brown, this grade has a value of $190. In Red-Brown, the value increases to $300. In Full Red, we see a dramatic jump to $550.

If you intend on selling your 1883 Indian Head penny and suspect it may be Red-Brown or even Full Red, it will be worth your time to have it authenticated by a coin-grading service.