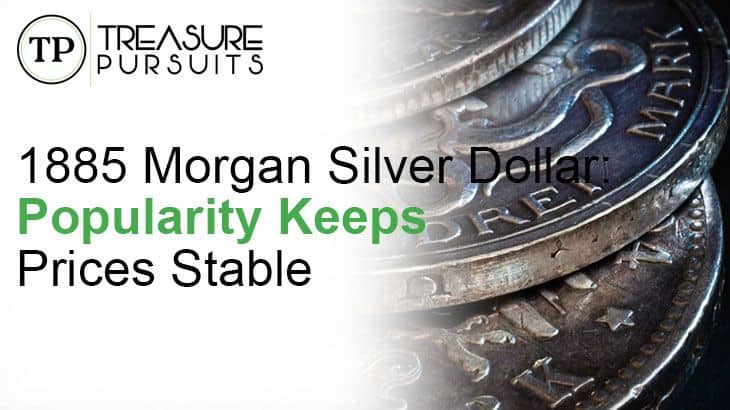 A collector's dream, the Morgan Silver Dollar is an overwhelmingly popular and relatively rare US coin. First minted in 1878, the Morgan Dollar enjoyed a long production run that spanned 43 years.

Due to a low amount of silver in the US Mint’s reserves, silver dollars prior to the Morgan Dollar were not produced in large quantities. This shortage and the government’s demand for more silver dollars in circulation resulted in the passage of the Bland-Allison Act in 1873.

The main part of the Act allowed the US Mint to purchase large amounts of silver so silver dollar production could continue.

Designer and US Mint assistant engraver George T. Morgan, was given the opportunity to design the United States next silver dollar. Morgan’s design was put into production in 1878 and would continue to be produced until 1904, when a silver shortage stopped production.

Morgan Silver Dollar production resumed in 1921, but was later ended that same year after the introduction of the Peace Dollar.

On the reverse, an eagle with it’s wings spread surrounded by a wreath is the main design. The motto “UNITED STATES OF AMERICA” and “IN GOD WE TRUST” is found above the the eagle. “ONE DOLLAR” can be found below the eagle and is the coin’s monetary value.

About the 1885 Morgan Dollar

The 1885 Morgan Silver Dollar is considered an early date for the Morgan Dollar series. These earlier dated coins saw a much lower mintage figure than those produced later in the series.

Due to the lack of a mintmark, the 1885 Morgan Silver Dollar was minted in Philadelphia at the US Mint’s main branch. During production, 17,787,000 examples were struck, a relatively low number when compared to the final years that the Morgan Dollar was produced.

All Morgan Dollars were composed of the same mix of metals, 90% silver and 10% copper. Each coin weighs 26.73 grams and has a diameter of 38.1 inches. Reeding can be found on the edges and denticles are present on the obverse and reverse of the coin.

Why Are Morgan Dollars So Popular?

Morgan Silver Dollars are unlike any other type of US coin. A simple but elegant design mixed with a high silver content coin makes a huge appeal to collectors. Holding a shiny, heavy coin and thinking about it’s history is what makes coin collecting such a great hobby.

Apart from being a unique and likeable coin, the Morgan Silver Dollar also acquires popularity by being a sound investment. The 90% silver content makes the coin an easy way for investors and collectors alike to invest in silver. Another positive for investors is that the value of the Morgan Dollar is normally very stable because of collector demand.

Mintage also plays a smaller part in the demand. Most dates have relatively low mintages that make the coins easy enough to purchase, but scarce enough to hold their value.

Value of the 1885 Morgan Dollar

Worn examples are worth about $25, while an 1885 Morgan Silver Dollar in average condition is valued at $30.

Popularity continues to drive the prices of the 1885 Morgan Silver Dollar and other Morgan Dollars in general. More collectors and investors that begin to acquire Morgan Dollars will only continue to push prices higher.