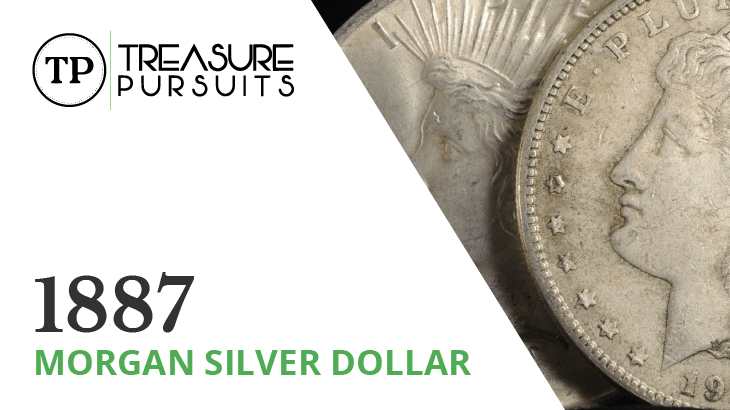 As the most popular dollar series coin ever produced, the Morgan silver dollar has seen great collector following in modern times. Because of government regulations and hoarding, many Morgan dollars can be found in high uncirculated grades.

The reverse features an American bald eagle with outstretched wings and surrounded by a wreath. “UNITED STATES OF AMERICA” and “IN GOD WE TRUST” are found above the eagle. The denomination of the coin, “ONE DOLLAR,” is found directly below the eagle.

History of the 1887 Morgan Silver Dollar

Morgan silver dollars tended to have increased mintage figures each year that the coin was in production. Many later-year dates tend to have much higher mintage numbers than earlier examples.

All Morgan dollars were composed of the same mix of metals, which was 90% silver and 10% copper. Each coin weighs 26.73 grams and has a diameter of 38.1 inches. Reeding can be found on the edges, and denticles are present on the obverse and reverse of the coin.

Some VAMs are more recognized and worth more than others. In this section, only those VAMs that are recognized by top-tier third-party grading companies will be included.

Here are some of the most known and sought after 1887 Morgan Silver Dollar VAMs:

Many examples of the 1887 Morgan silver dollar survive today, and most can be found in very high grades. Even those in the lowest grades are always worth their value in silver (which is, as of this writing, $12.50).

Examples between Good 4 and Fine 12 have a price that is between $20 and $30. A grade of Very Fine 20 has an associated price of $36, and even a significant increase to Extremely Fine 40 sees only a marginal price increase.

Uncirculated examples are common and can be found online and in shops for relatively low prices. MS-60 examples are normally priced at $45, and MS-63 graded coins get a price increase to $65. A real jump to MS-65 is when the price also increases significantly to $145.

Even in a very high grade for Morgan silver dollars, MS-67 only realizes a price of $1,650. This is significantly lower than most other Morgan dollar years!