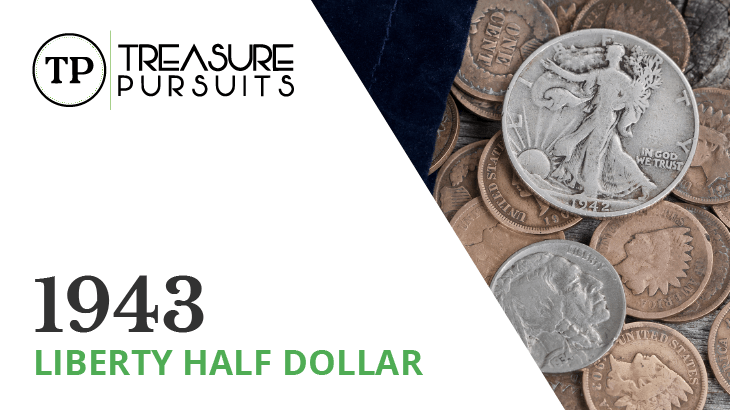 Part of a popular and closely followed series, the Walking Liberty half dollar finds itself in many collections. Ease of purchase and pleasing design details makes this coin an easy choice for new and experienced collectors alike.

After opening a contest to find the design for the next half dollar, the US Mint chose sculptor Adolph Weinman’s design. The unique design that featured Lady Liberty walking toward the sun became a problem for the mint to produce. Thus, early years in the series do not have the best strike qualities.

For the obverse design, Weinman used Lady Liberty in a flowing gown with a American flag over her shoulders, walking toward a rising sun. “LIBERTY” can be found along the edge of the obverse. The motto “IN GOD WE TRUST” is found in the right field, and the date is centered at the bottom.

On the reverse, an American bald eagle is perched on a mountain top with its wings outstretched. “E PLURIBUS UNUM” is found just to the left of the eagle. The phrases “UNITED STATES OF AMERICA” and “HALF DOLLAR” can be found at the top and bottom of the reverse, respectively.

History of the 1943 Walking Liberty Half Dollar

Most of the Walking Liberty half dollars made in the 1940s had large mintages and no common errors. Strike quality was still somewhat of an issue, but nothing that was as bad as the first couple years of production.

The Mint at Philadelphia reports striking a total of 11,346,000 examples of the Walking Liberty half dollar dated 1943. This mintage amount is considered a normal mintage run for a year in the 1940s.

A problem that plagues most collectors of the Walking Liberty half dollar is finding examples that have an above average strike. With the mintage issues that were very common, this is be a tricky challenge.

For collectors who want to find above average strikes, they will need to search both online and brick-and-mortar coin stores. Since many dealers know that better quality Walking Liberty half dollars are in demand, they will price accordingly.

One way a collector can have a chance at a quality Walking Liberty half dollar at an non-inflated price is by looking on ebay. Most coins will not have a quality strike, but if you look hard enough it is possible to find coins that are of above average quality. This searching normally takes time but can result in coins that are of superior quality for the price of an average-struck example.

Another possible way to obtain above-quality pieces is by going to a local coin dealer. Looking through their wares may be easier than looking at poor pictures on the internet, but keep in mind that the stock will probably be limited.

A local coin dealer may price higher, but the convenience may be worth the extra money. If you are not against paying a slight premium for a coin, you could even ask the dealer if they have, or can keep an eye out for, a quality example.

Pricing the 1943 Walking Liberty Half Dollar

Like most non-modern coins, the surviving Walking Liberty half dollars are in lower quality conditions. Despite this, each coin is worth a minimum of $5.71 in silver value.

Coins in the uncirculated condition are where the price increases begin. MS-60 examples are given a value of $33, and a three-point increase of the MS-63 results in a price increase to $45.

Prices for these coins will most likely not change in the coming future as there is a large enough supply for any increased demand. Quality pieces will always be demanded and will continue to bring higher prices.