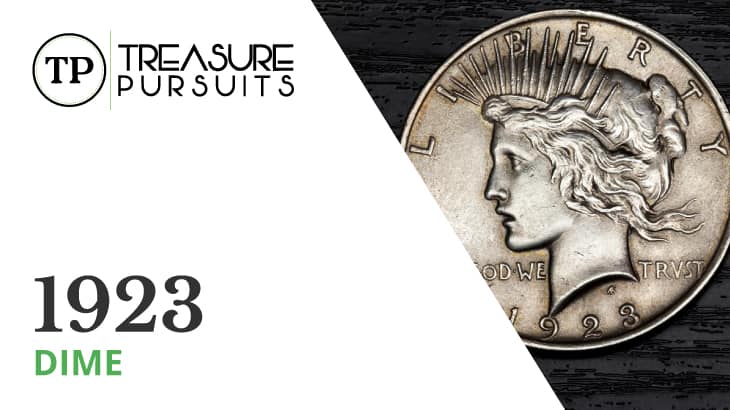 First struck over 100 years ago, the Mercury dime, with its elegant classical imagery and its attractive design, is still one of the most widely collected US coins.

1916 was the first year of the Mercury dime and the final year of its rather unpopular predecessor, the Barber dime. Following a design competition and several months of revisions and difficulties, Adolph Weinmann’s design began production.

The obverse portrait is not the Roman god Mercury, but in fact Liberty in a winged Phrygian cap. Similar to the Indian Head penny, “Mercury dime” is in fact simply a popular misnomer.

Along the rim is the standard “LIBERTY” legend, along with the motto “IN GOD WE TRUST” in the lower left field and the year of mintage at the bottom.

The reverse, likewise drawing from classical antiquity, depicts a fasces wrapped in an olive branch. The fasces is a symbol of Etruscan and Roman origin that represents unity, authority, and strength. This is tempered by the peace signified by the olive branch.

To the right of the fasces is the motto “E PLURIBUS UNUM.” The rim holds the legend “UNITED STATES OF AMERICA” and the denomination “ONE DIME.”

Compositionally, the Mercury dime is 90% silver and 10% copper and has a diameter of 17.9 millimeters and a mass of 2.5 grams.

Although it was only struck for 29 years, the Mercury dime saw two world wars and the Great Depression before being replaced in 1945 by the Roosevelt dime.

History of the 1923 Mercury Dime

Philadelphia struck 50,130,000 Mercury dimes in total in 1923, and this issue tends to exhibit great luster and quality strikes. However, with such a large mintage, Philadelphia dimes remain common up into Brilliant Uncirculated grades.

Denver did not strike any dimes this year, likely because the recession meant that demand had not recovered enough to warrant a third mint producing dimes.

An important element used for determining strike quality and wear of Mercury dimes is the fasces on the reverse, specifically the three horizontal bands that bind the rods together.

Each of these bands is divided in half by a horizontal line. However, this dividing line is frequently incomplete, unclear, or shallow.

Specimens on which the dividing lines on all three bands are complete and sharply struck are known as Full Bands or Full Split Bands dimes, usually abbreviated as “FB.”

As Full Split Bands are indicative of a high quality strike and minimal wear, FB dimes are highly valued by collectors and can raise the premium of a coin quite a bit. They can be tricky to find, however, as Full Bands are typically only visible in high grades.

For 1923 Mercury dimes, the Philadelphia issue is readily available with Full Bands, but FB San Francisco issues are very elusive.

If you think you have a Full Bands example, especially on a 1923-S dime, consider having it authenticated by a coin-grading service like NGC or PCGS.

The melt value, the intrinsic value of the silver content, is typically the minimum price you can get for a 1923 Mercury dime. The current spot price of silver results in an approximate melt value of $1.10 for this coin.

Numismatically, the value differs quite a bit depending on where the dime was minted. There is no mint mark on Philadelphia dimes, but San Francisco dimes will have an “S” to the right of the “E” in “ONE” on the reverse.

In grades above MS-65, both issues can be worth thousands, though these are extremely hard to come by.