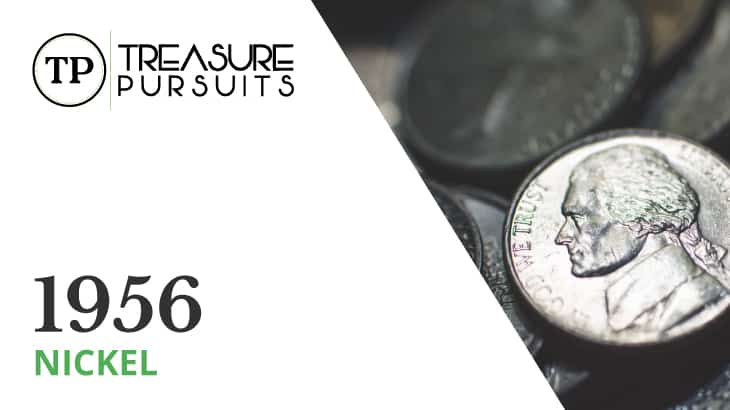 A lasting testament to one of the founding fathers, the Jefferson nickel is still being minted after 80 years.

The Jefferson nickel began in 1938 as the successor to the beloved but notoriously difficult to produce Buffalo nickel. The design was completed by Felix Schlag and was intended to honor Thomas Jefferson.

The design has evolved throughout the coin’s long mintage. The original design was replaced in 2004 with a series of designs commemorating westward expansion. Then, in 2006 Schlag’s reverse design returned, and the obverse was replaced by the forward-facing Jefferson that is still used today.

The composition of the Jefferson nickel is 75% copper and 25% nickel, with the exception of the Wartime nickels, struck from 1942 to 1945, which featured a mix of copper, silver, and manganese.

To find out more about collecting nickels, don’t miss our Ultimate Guide to Rare Nickels!

History of the 1956 Jefferson Nickel

In 1956, the eighteenth mintage of the series, over 100,000 Jefferson nickels were produced between Philadelphia and Denver.

Denver produced the majority, with 67,222,940. Denver issues tend to exhibit nice luster, but strike quality is often lacking. A few repunched mint mark varieties exist, but they are minor and do not usually bring a higher premium.

Philadelphia struck 35,216,000 nickels, most of which show both quality luster and sharp strikes. Several nice doubled-die reverse varieties are found in this issue and have received attention from collectors.

The 1956 issue is typical for its type. It uses the pre-war composition of 75% copper and 25% nickel, and it features Schlag’s classic obverse and reverse designs. Also typical for the series, it has a diameter of 21.2 millimeters and a mass of 5 grams.

Comparable to the Full Band varieties of Mercury and Roosevelt dimes, one of the most important factors for determining the strike quality and condition of a Jefferson nickel is the staircase on the reverse Monticello engraving.

Whereas the stairs lose their distinction on many average nickels, exceptionally well-struck examples will preserve the division between each step on the staircase, allowing the possessor to distinguish either five or six individual steps.

Such examples are referred to as Full Step nickels, which may be abbreviated simply as FS or as 5FS or 6FS, depending on how many steps are visible. 6FS specimens are exceedingly rare in nickels minted before 1971.

The Full Steps designation is indicative of a very well-struck and well-preserved coin, and many collectors actively seek out such specimens. Consequently, having Full Steps can greatly increase the value of a coin.

The 1956 issue is all but impossible to find in 6FS. 5FS specimens are somewhat available among the Philadelphia issues, but their Denver counterparts are quite rare in 5FS.

1956 Jefferson nickels are still quite common, and they occasionally turn up even in pocket change, so their numismatic value is very low. They are not usually worth above face value in grades below Uncirculated.

Moreover, Full Step specimens from both mints frequently sell for over a thousand dollars at auction, so if you think your 1956 nickel exhibits Full Steps, it may be well worth your time to send it to be authenticated by a coin-grading service like NGC or PCGS.