The 1944 Liberty dime also called the Mercury dime is sought after by collectors and investors. This dime had a run of 39 years of production from the US mint. It was first minted in 1916, which means during the liberty dimes production it saw the United States go through the Great Depression and two world wars.

The Winged Liberty Dime aka the Mercury dime was designed by Adolph Weinman. The design was to depict the Roman god Mercury, but many got it confused with a young liberty. This is why many refer to this coin as the Liberty dime.

The liberty dime is desired by collectors and investors due to its metal composition. It is composed of 90% silver with the remaining 10% being copper. Due to the silver content many times investors will buy these dimes in bulk just for silver.

With the rise of vending machines, there had to be a change in the design of the dime. It was known to have issues in vending machines. So the production of the liberty dime was stopped in 1945 in favor of a dime that didn’t cause issues. So the Treasury ordered a new design featuring President Franklin Roosevelt on the new dime.

History of the 1944 Liberty Dime

The 1944 issue, the second to last year of the series, had a fairly sizable mintage of over 343 million dimes. This was the largest of the liberty dimes production years, but that doesn’t mean there isn’t value to the liberty dime.

Three locations–Philadelphia, Denver, and San Francisco–struck dimes in 1944. Philadelphia struck by far the most: 231,410,000. This striking of the liberty dime was actually the most struck during its run. The dime is still pretty common, even in Brilliant Uncirculated form, though most coins show weak strikes thus not many are sent for grading.

A nice doubled-die obverse is known for this issue and is popular with collectors.

Denver struck 62,224,000 dimes this year, and this issue, like that of Philadelphia, is still fairly common in Mint State. Denver mintages generally have the strongest strike of any 1944 dime issue. An RPM (repunched mint mark) is known for this issue from Denver, but it’s less common thus making it popular with collectors.

Last is San Francisco, which minted 49,490,000 dimes. This issue is common in most grades, but when it comes to full-band grades it is more scarce. Several varieties are known, including the knob tail S and repunched mint marks, of the two the knob tail S is the most scarce.

Since the 1944 Liberty dime was struck before 1965, it belongs to the silver composition dimes, meaning that it contains 90% silver and 10% copper and has a diameter of 17.8 millimeters.

Want to know more about the Liberty Dime as well as other collectible US Dimes? Be sure to check out our Ultimate Guide to Collectible Dimes.

As stated above the 1944 Liberty dime was minted in great numbers but came with it was lower quality in its striking. Due to the heavy production, most coins show weak strikes thus not many are worth being sent for grading.

The key to finding a full band 1944 liberty dime would come from finding one that was uncirculated. Even if it was stuck with Full Bands it doesn’t take much circulation of the dime to wear it down.

1944 Liberty Dimes that display Full Bands are rare and worth much more than similar grade coins. If you think you have a liberty dime with full bands you will want to have it graded to get the official “Full Bands” designation. This requires a collector to send their coin in to get it certified if they want to claim this designation which makes it more valuable. 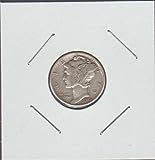 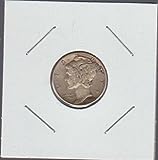 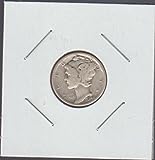 Despite their age, liberty dimes overall are still quite common, and 1944 is no exception to this. Still, a coin in the right condition can be worth a fair amount of money. Moreover, the mintage location can raise the value as well as the condition of the coin.

As with all coins composed largely of precious metals, the 1944 Liberty dime is worth more than face value simply in terms of its silver content. With the current price of silver at $17.20 per ounce, the melt value for this coin is around $1.20.

The 1944 Liberty dime’s numismatic value (its value to collectors) is higher than the melt value, even for lower grades. This is good news as people are readily buying it not only for its silver but its collectability.

Values rise only when the coin is in MS-55 condition, with examples retailing for $5. If you have a grade MS-65 liberty dime can still be had for around $27. The prices for this 1944 dime haven’t changed much over the years.

1944 Liberty Dimes that have the “Full Bands” grading designation are far more valuable coins.vMS-65 coins with Full Bands are valued at $80, which is more than double the value of the $27 for a non-designation example. No 1944 liberty dimes have been graded lower than MS-60 while receiving a “Full Bands” designation, based on third party grader NCG’s database.