The 1957 Silver Quarter, from the Washington Quarters category, is one of the most sought coins by collectors and investors, with the collection of these coins rising heavily starting in 1965, just a few years after minting.

This category of the quarter had a long-time run of 66 years of production from the US mint. It was first minted in 1932, which means during the Washington Quarter production it saw the United States go through the Great Depression, World War 2 and the Cold War.

The Washington Quarter was designed by John Flanagan. The design was intended to depict the first President of the United States, George Washington, on the obverse side and the bald eagle with wings spread and standing on a shaft of arrows with two olive sprays on the reverse side.

From 1932 to 1964, the US mint produced these Washington Quarters with a large silver composition, as was common, which, as the price of silver increased, induced collectors and investors to seek-out these quarter dollars.

As of now, the 1957 Silver Quarter is desired by collectors and investors due to that same metal composition. The Silver Quarter is composed of 90% silver with the remaining 10% being copper. Due to the silver content, many times investors will buy these dimes in bulk just for silver.

When the Coinage Act of 1965 was passed, it eliminated silver from US dimes and quarter dollar coins to help reduce the country’s reliance on silver in coinage. Beginning in 1959, there had been coin shortages in the United States, forcing the US mint to expand production significantly to try to meet the demand. This, and other factors, put pressure on the price of silver, which the US had capped at just over $1.29 per ounce. Because of that, the amount of silver in a dollar’s worth of quarters was worth more as bullion than as money, in the event that the price of silver rose past $1.38 per ounce. Because of that, there was fairly widespread hoarding of silver coins including the silver quarters.

The US mint increased production of coins to help reduce the coin shortages, but even with these measures, government stocks of silver were rapidly being reduced, with the potential of running out by 1968. As a result, the Coinage Act of 1965 was enacted on July 23, 1965.

The new silverless coins entered circulation in late 1965, and alleviated coin shortages. Within two years, the Treasury ended its efforts to keep silver prices low and precious metal coins like the 1957 Silver Quarter were being hoarded by collectors and investors.

History of the 1957 Silver Quarter

The 1957 issue was a direct result of the rising demand for coinage. The Denver mint’s production of quarters in 1957 more than doubled over those produced in 1956, the highest of any Washington Quarter since 1944.

But Denver wasn’t alone in striking quarters in 1957. Two mint locations–Philadelphia and Denver–struck quarters in 1957. Denver struck by far the most: 77,924,160. This was almost double the amount struck by Philadelphia, although both mints were, at the time, using worn dies to strike quarters and, as a result, many of the quarters, even in uncirculated mint condition, show signs of poor polishing and smoother fields.

Philadelphia struck 46,532,000 quarters this year, and this issue, like that of Denver, is still fairly common in Mint State. The use of worn dies to strike quarters in 1957 was most prevalent at the Philadelphia mint.

Since the 1957 Silver Quarter was struck before 1965 and the passing of the Coinage Act of 1965, it belongs to the silver composition quarters, meaning that it contains 90% silver and 10% copper and has a diameter of 24.3 millimeters.

As stated above the 1957 Silver Quarter was minted in great numbers but came with it was lower quality in its striking. What also came with higher minting quantities also came a higher number of proof minting.

Proof coins were minted at a ratio of 1 per 50 quarters minted in 1957, which is a much greater quantity than typically minted in prior years. Because a proof coin usually fetches a higher price than even an uncirculated coin, proofs are shinier and more detailed, you’d think that the 1957 Silver Quarter proofs would fetch a higher price.

However, this isn’t always the case in this situation–or if they do fetch a higher price, it’s not as much of a significant difference as with other coinage. The reason for this is because of the sheer quantity of proofs minted for this year. 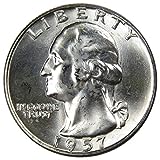 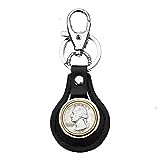 Roughly, this coins value, in average condition, can be estimated to be valued at about $6, while a 1957 Silver Quarter in certified mint state (MS+) condition might auction for as much as $45*.

Silver’s current demands are primarily for industrial applications and investments. Silver continues to be valued highly on the market around the world, as clearly evident by the averages and NYSE. With the current price of silver at $17.20 per ounce, the melt value for this coin is around $3.20.

As with any other commodity, silver’s price is primarily based on supply, demand and speculation, so when investing in silver coinage, risks must be assumed. Fluctuations in the value of silver typically occur because of changes in use and production, meaning that what happens in the mining fields and in the industry using silver in industrial applications may widely impact the value of silver.

* This estimated value does not reference any standard coin grading scale. So, when we state ‘average’, this is meant to mean ‘in a similar condition to other coins issued in 1957’, and ‘mint state’ meaning the coin has been certified MS+ by one of the top coin grading companies.