Throughout the 15 year issuance of the Franklin Half Dollar, the US mint produced them with a large silver composition, as was common, which, as the price of silver increased, induced collectors and investors to seek-out these Half Dollars, particularly following the passage of the Coinage Act of 1965.

As of now, the 1952 Franklin Half Dollar is desired by collectors due to the coin’s uniqueness. Although the coin is more highly valued by investors over its face value due to the metal composition, the coin is valued much higher by collectors, moreover than the silver content.

The 1952 Benjamin Franklin Half Dollar

The Franklin Half Dollar had a run of 15 years of production from the US mint. Minted from 1948 to 1963, these Half Dollars were replaced beginning in 1964 by the Kennedy Half Dollar in memoriam of President John F. Kennedy, following his assassination.

The Franklin Half Dollar was designed by John R. Sinnock, although he died before the designs were completed and his successor, Gilroy Roberts completed the designs. Intended to depict the Benjamin Franklin, the first non-president to be depicted on a coin, on the obverse side and the Liberty Bell on the reverse side, there was controversy regarding the design choices at the time of the minting due to various factors, but the US Mint chose to move forward with the original design.

History of the 1952 Franklin Half Dollar

The 1952 Franklin half dollar issue was a direct result of the rising demand for coinage as the economy was experiencing substantial stability and growth.

All three mint locations–San Francisco, Philadelphia and Denver struck Benjamin Franklin half dollars in 1952 totaling 31,003,580. Denver mint struck the most with 25,395,600, due to this The Denver mint mark half dollar is still pretty common.

San Francisco struck 5,526,000 half dollars in 1952. While looking at numbers you would think this mint mark for the Benjamin Franklin half dollar would be second most sought after. But due to the ability to find some of these still in excellent shape the S mark in prime condition is sought after.

Philadelphia mint only struck 81,980 Franklin half dollars during 1952. That makes the Philadelphia mint mark desirable due to the production of under 100,000 coins but most coins have poor striking or heavy use. This makes them less desirable as a collector.

Since the 1952 Benjamin Franklin half dollar was struck before 1965, it belongs to the silver composition dimes, meaning that it contains 90% silver and 10% copper and has a diameter of 30.6 millimeters. The coin has a melt value for the silver of around $6.30 because it has .3575 oz of Silver.

Because of the Coinage act in 1965, the new silverless coins entered circulation in late 1965, and alleviated coin shortages. Within two years, the Treasury ended its efforts to keep silver prices low and precious metal coins like the 1952 Franklin Half Dollars were being hoarded by collectors and investors.

In the case of the 1952 Ben Franklin half dollar, you would think the most desired mint mark would be “P” for Philadelphia mint due to it minting just under 82,000 of the half dollar coins. They are not found in good condition. So the reality is that the Full proof with bell lines with an S is a rarity to find thus the San Fransisco mint of this coin is actually more sought after. 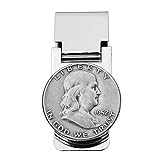 Valuing the 1952 Franklin Half Dollar

Roughly, this coins value, in average condition, can be estimated to be valued at about $10, while a 1952 Franklin Half Dollar in certified mint state (MS+) condition might auction for as much as $70*.

The most highly sought Franklin Half Dollar is said to have ‘full bell lines’. To qualify as having these full bell lines, the seven parallel lines at the bottom of the Liberty Bell on the reverse side must be fully visible, along with the three wisps of hair on the right of Franklin’s ear on the obverse side, with no bleeding together of these items.

Due to the desire for “full bell lines,” the mint mark has less bearing on the overall value. Due to this the San Francisco mintage of the half dollar coin in MS with Full bell lines sold for just under $10,000 a few years ago. While a Denver Mintage with Full bell lines sold for just under $10,000 as well a few years ago. Of course, Philidelphia mintage is still desired and valuable the problem is they are not found with Full Bell Lines. All 3 mints can be found in MS65 – MS67* graded range.

Although this coin is valued higher to collectors than the value of the silver component, it is still worth noting that the coin’s intrinsic value in just silver is still higher than face value, as it’s melt value is around $6.30 because it has .3575 oz of Silver.

* This estimated value does not reference any standard coin grading scale. So, when we state ‘average’, this is meant to mean ‘in a similar condition to other coins issued in 1952’, and ‘mint state’ meaning the coin has been certified MS+ by one of the top coin grading companies.