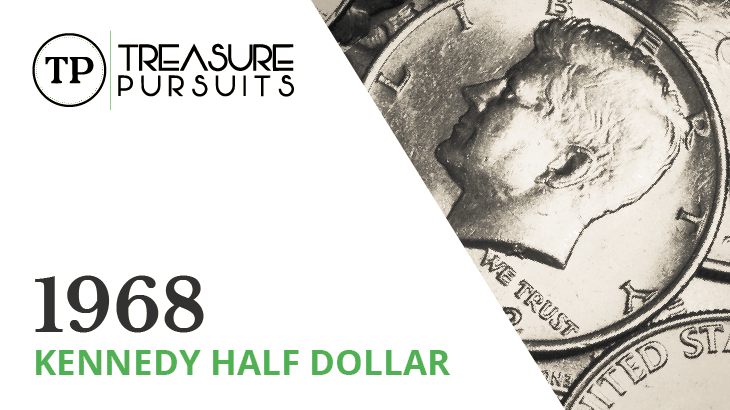 Throughout its mintage, the Kennedy half dollar has been much more popular as a collector’s item than as currency, and this is still true today.

The coin was first minted in 1964, mere months following the assassination of John F. Kennedy. Since the previous design for the half dollar (the Franklin half dollar) had not been in production for 25 years, it took an act of Congress to authorize the new commemorative Kennedy design.

The coin’s status as a commemorative piece and its initial silver value encouraged excessive hoarding, and the coin thus saw relatively low circulation, even when all silver was removed in 1971.

The obverse face of the coin was designed by Gilroy Roberts and features a profile bust portrait of Kennedy with the legend “LIBERTY” along the upper rim and the year of mintage below his head. Divided by his neck is the motto “IN GOD WE TRUST.”

The reverse face was designed by Frank Gasparro and features an eagle with outspread wings clutching a bundle of arrows in one foot and an olive branch in the other. Surrounding the eagle is a ring of stars, and above its head is a banner that reads “E PLURIBUS UNUM.”

Along the upper rim is the legend “UNITED STATES OF AMERICA,” and along the lower rim is the denomination “HALF DOLLAR.”

Kennedy half dollars have seen a number of special editions and sets, and are nowadays struck mostly for collectors.

History of the 1968 Kennedy Half Dollar

1968 was the fifth mintage of the Kennedy half dollar and was the first year that the coin was produced in more than one mint.

The vast majority was produced at Denver this year, with 246,951,930 coins struck. However, 3,041,506 coins were struck at San Francisco as well, exclusively as proofs.

There are a number of varieties known for this issue, some of which can bring quite high premiums. One such example is the Inverted “S” variety, which, true to its name, features a San Francisco mint mark that has been struck upside down.

The newest variety found, which was only discovered in 2017, is also a mint mark variety that has been labelled “SERIF S/KNOB S” by NGC. Also a San Francisco mintage, the “S” is not the typical design used for this coin or indeed any coin yet identified.

Additionally, there is a “knob” present on each serif on the “S.” The history of this variety is not known, nor is the number of examples that exist.

There are also a number of doubled die varieties and other repunched mint mark varieties for this coin, although these are rare and not considered as significant.

Valuing the 1968 Kennedy Half Dollar

1968 Kennedy half dollars, thanks to a large mintage and the hoarding that was so common in these early mintages, are still very common today, even into higher grades. This means that the value is generally low for all but the rarest or highest quality coins.

Nevertheless, most coins are worth more to collectors than their face value or their melt value.

As with any coin that contains a significant amount of precious metal, the minimum value for a 1968 Kennedy half dollar is often its melt value. Based on the current price of silver, the melt value of this coin is around $2.40.

Denver issues graded from Good-4 to About Uncirculated-50 are worth $3.65. This is the average value for 1968 Kennedy half dollars.

San Francisco proofs, on the other hand, are valued at $8.39.

The most valuable specimens are the varieties discussed in the previous section.

Examples of the Inverted “S” variety within the grade range of PR-65 to PR-66 are reported to have sold for $400-700, although examples sold at private auctions have earned premiums as high as $2,500.