What would you think if someone paid you using a $2 bill? For most people, their response would be skepticism at the unusual bill. That is because $2 bills are not very common and some people may falsely assume that they are fake.

Heather McCabe is an avid collector of $2 bills, and even she has faced outright rejections at various establishments. Moreover, there have even been stories of individuals who got arrested and sent to prison for using these bills.

This all raises a lot of questions about the legitimacy of this bill and why there is so much fuss around it. So why not answer all your questions to help you be better informed.

What is the truth behind the $2 bills?

To understand the confusion around the $2 bills, you would have to go back over a century to when it was first introduced in 1862. At this time, all currency was issued in a large-size format unlike what you use today, and the $2 bill was no different.

Starting in 1929, the US Treasury switched to a small-size format that is still being used today. However, the $2 bill was only issued as a United States note, but this kind of currency was phased out when private ownership of gold and silver was banned and the notes could no longer be redeemed for gold or silver. Read about the 1928 $2 bill and its value.

Since it was introduced in the 19th century, the $2 bill never became as popular as the $1 bill, and its use became even less over the years. Add to that, this rare bill became associated with vices for its popular use in gambling on horse racing, strip clubs, and bribery.

Its lack of popularity eventually led to its discontinuation in 1966. Nevertheless, it was brought back into circulation in 1976, this time as a Federal Reserve note. The main reason for the comeback was the argument that replacing $1 bills with the $2 bills would save the federal government a lot of money in production, shipping, and storage. Get more information on the 1976 $2 bill value.

The most obviously unique feature of the two-dollar bill is in its look ever since it was introduced. From 1862 the obverse side featured a portrait of Thomas Jefferson prominently as well as a vignette of the Capitol. The reverse side then had a rendition of Jefferson’s home, Monticello.

Even after the Treasury introduced the smaller size format, nothing really changed about the design. Also, because it was still a United States note, the treasury seal was red as was the serial number.

Following the reintroduction in 1976, however, the reverse side design was modified into a depiction of the Declaration of Independence by John Trumbull. Since then, two-dollar bills have been released in series every time there are changes in design and/or signatories. $2 Federal Reserve notes appear either as 1976, 1995, 2003, 2003A, 2009, or 2013 series.

The 2013 $2 bill is the most recent series and has been released from January 2015 in New York to November 2018 in San Fransisco by the individual Federal Reserves.

Other than the design, the really special thing about the 2013 $2 bill is in its rarity. There are currently about one billion $2 bills in circulation today. That sounds a lot until you realize there are over 10 billion $1 and $100 bills each also in circulation.

Besides, people have been known to hoard these notes believing they are much more valuable and this makes the two-dollar bill even rarer. That is why this bill has an average lifespan of 6 years while a $1 bill only has a lifespan of 10 months.

Despite this, the actual value of a $2 bill is exactly as printed – $2. But rarity will always make an item more expensive as per market forces, and the $2 bill has been sold for a lot more than its printed or actual value.

Because there is no difference in the actual value of the bill, the 2013 $2 bill has become a collector’s item. The easiest way to get a 2013 $2 bill is at a bank just like any other currency, but chances are your local bank may not have it in their vault. And even if you do get it at your bank, it will most likely have already been circulated.

In general, uncirculated and certified notes are more valuable, and you should strive to find one that is both. 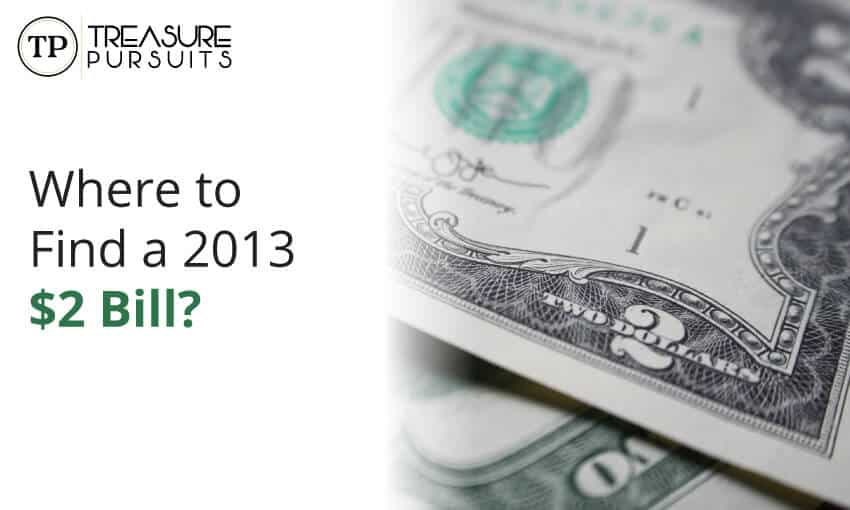 One of the easiest sources of the 2013 $2 bill is on eBay, where a PMG-certified, uncirculated bill can cost up to $100.

There are some features that make one two-dollar bill costlier such as a unique serial number. Therefore, uncertified and already circulated bills, although not very valuable, can still fetch a good price if they have a unique feature about them.