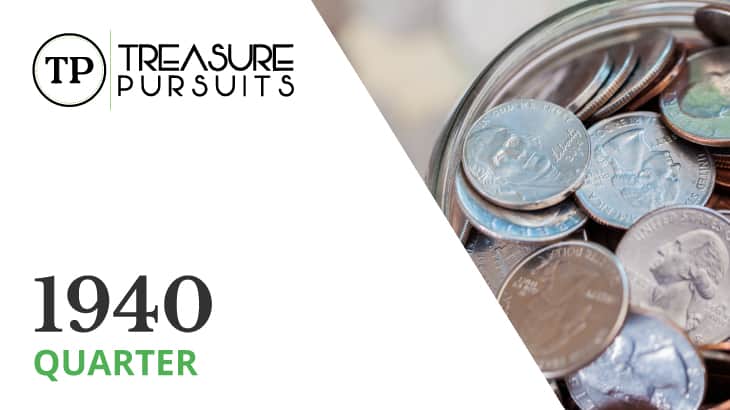 The Washington quarter, a simple yet beloved coin, has been popular throughout its long mintage and is a great coin for beginning collectors.

The Washington quarter began production in 1932 as a commemorative piece honoring the bicentennial of George Washington’s birth. The economic crisis America was experiencing at the time meant that there was really no demand for a new quarter piece.

Nevertheless, the Washington quarter was produced; it was originally intended as a one-issue coin, but it continued to be minted long after 1932.

The designer responsible for the Washington quarter was John Flanagan. His obverse design features a profile bust portrait of Washington in the center, the legend “LIBERTY” along the upper rim, the motto “IN GOD WE TRUST” in the left field, and the year of mintage at the bottom.

The reverse face depicts a perched eagle with outspread wings. Above the eagle are the legends “UNITED STATES OF AMERICA” and “E PLURIBUS UNUM,” and below the eagle are an olive branch and the denomination “QUARTER DOLLAR.”

There are two types of Washington quarters. The first, called the silver type, was minted from 1932 to 1964 and contains 90% silver and 10% copper. In 1965 the second type, called the clad type, changed the composition to 91.67% copper and 8.33% nickel in response to a rise in silver prices.

The clad composition was used until the end of the series in 1998, when the Washington quarter was replaced with the Washington State quarters, which retained Flanagan’s obverse design.

For more information on collecting quarters, don’t forget to check out our Ultimate Guide to Rare Quarters!

History of the 1940 Washington Quarter

1940 was a fairly typical year for the Washington quarter. This issue was minted in three locations: Philadelphia, Denver, and San Francisco.

Philadelphia minted by far the largest number of quarters this year, with a total of 35,715,246. Next is San Francisco, with 8,244,000. Denver produced the fewest, with only 2,797,600 quarters struck. This abnormally small production number for Denver has been attributed to there being an abundance of quarters from the previous year still within the Mint’s possession.

On the other hand, the San Francisco mintage was an abnormally high number for the location. The result of this is that the San Francisco dies became overused and had to be repeatedly polished, meaning that many 1940 coins from this location show weakened design elements, polish marks, and the occasional prooflike luster.

Similar signs of overused die wear are present on many Philadelphia specimens, though not as extreme as San Francisco coins, since Philadelphia was better equipped for large production numbers.

Several varieties are known for quarters from all three locations, including doubled dies and repunched mint marks.

The 1940 coins fall into the Type I Washington quarters and thus contain 90% silver. The mass of 6.25 grams and diameter of 24.3 millimeters are typical for the series.

Because this quarter contains a high percentage silver, the minimum value for these coins is often their melt value, or how much the metal is worth to a precious metals dealer.

Based on the current price of silver, the melt value of the 1940 Washington quarter is approximately $2.78. This value should be the same regardless of the condition of your coin.

The numismatic value of this quarter (how much it’s worth to collectors) varies depending on grade and mint mark.

Philadelphia issues display no mint mark and are the least valuable. Good-4 to Very Fine-20 grades are worth $4.14. This should be taken as the average range for most specimens.

Denver issues, signified by a “D,” are the most valuable due to their low mintage number. They are likewise worth $4.14 in Good-4 to Very Good-8 grades, but their value increases quickly in higher grades.