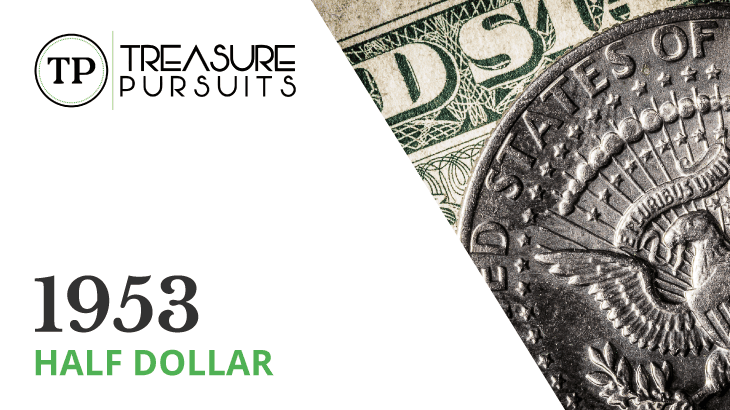 Benjamin Franklin was an important founding father of the United States whose suggested ideas for the government was revolutionary for the time. Americans today are still very familiar with Benjamin Franklin and his contributions to both science and democracy.

Mint chief engraver John Sinnock was tasked with creating a coin design that would commemorate Franklin for all of the work he did to help create the American Democratic system. Sinnock passed away before the design was completed, however, and Gilroy Roberts has to take over and complete the project in 1948. The same year, the Franklin Half Dollar would be put into production.

The Liberty Bell is centered on the reverse, and “E PLURIBUS UNUM” is positioned to the left and an eagle to the right. “UNITED STATES OF AMERICA” can be found centered above the Liberty Bell. The denomination “HALF DOLLAR” is centered at the bottom along the rim.

History of the 1953 Franklin Half Dollar

Mintage numbers for the Franklin half dollar in 1953 did not experience the large increase in mintages that would happen later on. Despite this, many examples still survive today in many different conditions.

A Shift in Mints for the Franklin Half Dollar

Some US coin series see some type of change in mintage destination during the course of production. The Franklin Half Dollar was one such series, for which mintage duties were slowly moved from Philadelphia to Denver.

At the beginning of the series in 1948, mintage figures were almost equal at each facility. This continued to be the case until 1953, which is when a drastic shift in mintage locations occurred. More than 10 times the number of Franklin Half Dollars were minted in Denver that year.

From 1953 until the end of the series, the mintage responsibilities would remain the same, with Denver producing far more examples than Philadelphia. Part of the reason for the shift was because the Philadelphia Mint was also producing the Proof examples of the Franklin Half Dollar, which used more resources than a normal business strike.

Despite the large difference in mintages, both Philadelphia- and Denver-minted coins have relatively the same price. This means that collectors can put together collections without having to pay huge prices for Philadelphia examples. Prices given in the next section are only for Philadelphia-minted examples, but Denver examples are similar in price.

Pricing the 1953 Franklin Half Dollar

In the grades between Good 4 and Very Fine 20, each coin is worth $7.50. Extremely Fine 40 examples see a slight bump in price to $8.75. Most low-grade coins do not carry much of a premium, despite the fact that only 2.66 million were minted.

Uncirculated examples are generally worth much more but are still relatively cheap. An MS-60 and MS-63 example is worth $22 and $38, respectively. A jump to $125 is seen when an examples grades MS-65.