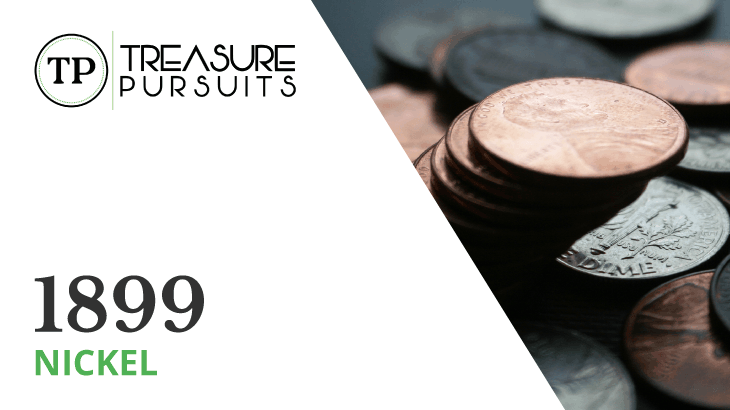 In 1883, the US Mint approved Charles Barber’s proposed nickel design. Barber’s design was put into production later that year and were produced until 1912. The popular Buffalo nickel succeeded the Liberty Head nickel in 1913.

On the obverse of the Liberty Head nickel is a bust of Lady Liberty, facing left and wearing a cornet inscribed with “LIBERTY.” Found along the edge of the obverse are thirteen small stars. The date of mintage can be found just below Liberty’s neck.

A Roman numeral “V” is found centered with a wreath around the outside on the reverse. Above the Roman numeral are the mottos “E PLURIBUS UNUM” and “UNITED STATES.” The word “CENTS” is centered at the bottom of the reverse and is meant to go with the “V,” thus designating the value of the coin at five cents.

If you would like to know more about the Liberty Head nickel or other rare and collectible nickels, be sure to check out our Ultimate Guide to Nickels.

History of the 1899 Liberty Head Nickel

The Liberty Head nickel was minted in massive numbers in 1899. These large mintage runs would continue for a decade due to a higher demand for currency because of the rapidly growing United States.

Liberty Head nickels are composed of 75% copper and 25% nickel, which has been the common composition for America’s nickels. Each also has a 21.21-mm diameter and a weight of 5.0 g. Denticles can be found on the obverse and reverse, and no reeding is present on the edge of the coin

Because a coin’s value is based on the amount of wear and overall condition of the surfaces, it is important to apply a correct grade. Grading a coin is subjective, but you can get a close grade using some simple guidelines.

Here are some simple ways to help determine what grade your Liberty Head Nickel is in.

Many examples of the 1899 Liberty Head nickel can still be commonly found in all grades. Lower grades tend to be more common and have a much lower price tag than premium grades.