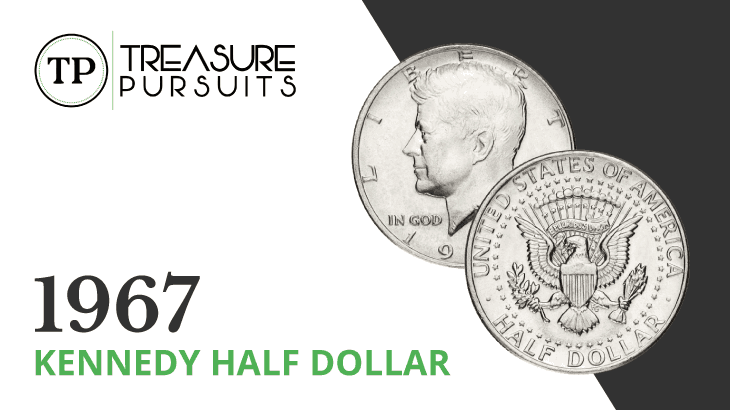 Although it is rare to find this coin in circulation today, Kennedy Half Dollars are still produced.

After congress authorized the creation of a new Half Dollar design to commemorate John F. Kennedy, US Mint sculptors Gilroy Roberts and Frank Gasparro were chosen to complete the task. The resulting design was simple and focused on honoring Kennedy and the nation he served. Production of the Kennedy Half Dollar would begin in 1964 and is still in production today.

On the obverse of the coin is a bust of John F. Kennedy facing left. The words “IN GOD WE TRUST” are split at the bottom of Kennedy’s neck and the motto “LIBERTY” is aligned along the top of the coin. The date of mintage can be found centered at the very bottom of the obverse.

History of the 1967 Kennedy Half Dollar

The Mint at Philadelphia reports minting 295,46,000 examples of the 1967 Kennedy Half Dollar. Most of these examples are either still in circulation or have been melted for their small silver value.

Disappearance of the Kennedy Half Dollar

Although still minted today, the Kennedy Half Dollar has almost completely disappeared from everyday circulation. The reason for the disappearance can be attributed to two main causes: a cashless society and less of a need for the denomination.

As the United States moved away from hard cash transactions and toward reliance on a credit system, many large-denomination coins began to be used less and less. Half Dollars were not used as commonly as smaller coins and felt a larger hit as more people used credit to make even small purchases.

No longer needing a half-dollar coin denomination can be attributed to one main thing: inflation.

So, given these reasons, why does the Mint still produce Kennedy Half Dollars?

Pricing the 1967 Kennedy Half Dollar

Determining the value of the 1967 Kennedy Half Dollar is relatively easy because of the number that was produced. The massive number of coins that were produced and the fact that examples can still be found in circulation has made every circulated example only worth its value in silver. The silver value at the time of this writing is $2.50.

However,  grades higher than MS-65 have been recorded being sold at much higher prices. An MS-67 example sold at auction in 2017 for just under $1,300. Very few examples are above MS-65 and most will fall near MS-60.